Every month the Sheridan Student Union puts on social events like trivia night, gaming tournaments, and pub nights to create a sense of community and school pride at Sheridan. But some students have expressed concern about the lack of Black History Month activities this February.

“If we have more black history events, people would be more engaged to learn about our culture,” said Child and Youth Care student Danielia Mindley.

But Akil Makenzie, the SSUs event coordinator at the Trafalgar campus, says there are events available that relate to the black community. They have a poster contest themed “Love in All Colours!” and a carnival at the Den and Marquee.

“As Event coordinator, I get kind of upset because people come up to me and ask what am I doing to support Black History Month. It’s like what are you talking about, there’s a lot going on,” said Makenzie. 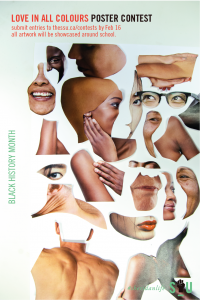 The poster contest is meant to unite and involve students by getting them to create and hang posters  around the school that will turn the halls into a gallery. At the end of the contest, the SSU is putting on one large open mic & poetry slam on February 21. This is a way to let students express themselves through poetry, and not just music, as former slaves and African-Americans did once they were free.

Also in connection with Black History month, the Humanities department is showing a film  that’s catered to the black community. They will be inviting people in the community in and outside of Sheridan to screen the movie, and those who attend will see the posters as they enter the school. The posters will also be sent in to an art competition, but that has yet to be announced.