Christine Rees ran out of books to read.

She was 17, on summer vacation in Muskoka, near Bracebridge. She had the lake and the pine trees, but no book to read.

With no internet and no stories, Rees decided she had only one option left — she would write her own.

A graduate of Sheridan’s Advertising Account Management postgraduate program, her ultimate dream was to be published.

“When I started writing my book, I had decided my goal was not to finish it — I knew I could finish it, because I’ve always loved writing and knew that wasn’t going to be a problem. But how was I to get published?” Rees said. “My age was already going to be somewhat of a handicap because I was 17. I had to prove to them that I was serious about writing.”

“The writing process takes a lot less time than the editing process,” Rees said. “I wrote the book in a summer. It took the rest of the time to edit, while I was studying at Western University.”

From start to finish, it took Rees two and a half years to write her debut novel, The Hidden Legacy.

“Even though this is my debut novel, this is the fourth novel I’ve ever written,” Rees said. “I’m really happy that I broke through and was finally able to publish it.”

Once the editing and re-writing is finished, the author needs to find a literary agent to represent her to a publishing agency. Rees had thought about self-publishing, but decided against it.

“I wanted someone else to believe in me too, so I could prove to myself that I could do this: I could be a writer.”

After many rejections and, in some cases, no answer from literary agencies, Rees discovered an indie publishing house who she was originally going to query when she had written her first novel years earlier. In July 2016, she decided to give this publishing house until September to accept her novel.

“If they said no, I would rewrite the entire thing,” Rees said.

A week before Rees was going to rewrite the story, she received an email from Evernight Teen Publishing House. They wanted to publish her book.

“I believe everything happens for a reason, “ Rees said. “I researched that publisher years ago and never submitted to them. It’s funny the way life works.”

Now, 24-year-old Rees writes for a living. She has plans for at least six more books.

“I have four writing projects on the go right now. That’s not including the book I plan to rewrite.”

In addition to writing teen fiction, Rees also works part-time for Sheridan College. “I went from teen fiction to [help writing a] textbook with a Sheridan professor. They’re very different.”

“I love Sheridan,” Rees said. “I love the environment and the people. If I can’t be a full time writer, I want to work here.”

From the outside, it would seem that all of Rees’ dreams have come true.

“I still feel like my dream hasn’t been met. I guess I’m too ambitious for my own good,” Rees said. “Now that I’ve been published with Evernight Teen, my goal is to find an agent or manager because I would love to be more than an Amazon bestseller — I love that by the way, it’s a really cool feeling — but there’s so much more that you can do when you’re an author.”

“I would love to build a name for myself. I don’t intend to be the next J.K. Rowling,” she said. “I want to connect with as many people as [Rowling] was able to. I think being able to create a story like hers from nothing… That to me is my next big goal. That’s my dream. I want to create a world that will connect with people.” 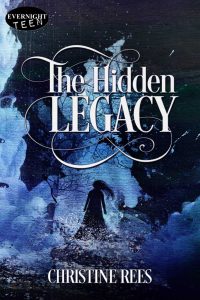 You can find The Hidden Legacy on most online book retailers: