Those are three words that describe a mixologist, also known as an individual who is highly skilled at formulating delicious mixes of alcohol into bold and artful cocktails. However, bartending and mixology are not the same thing; bartending focuses on making a drink expediently, while mixology focuses on creating a liquid masterpiece. It’s a fast paced and exciting career, as cocktail culture changes everyday.

For some, mixology isn’t always a planned career path, as was the case with enthusiastic newcomer Eleni Bock.

“Growing up in Saudi Arabia, which was a dry country (meaning no alcohol allowed) I had always held bartending and the craft of it to be beautiful, theatrical, and stimulating. When I left Saudi I didn’t have any plan to pursue mixology, but I’ve always had a passion for flavour combinations and hospitality in general.”

The opportunity struck when Bock had settled into her new life in Canada. “A few years into living in Canada, I was offered the chance to bartend at my place of past employment and jumped at the chance.” After that small taste of the career, Bock was hooked and was thirsty for more.

“Eventually, you begin looking for reasons and excuses to expand your knowledge as your passion builds and before long I was running a cocktail program and standardizing a new bar called Figures in Toronto.”

Bock may have been new to the world of mixology, but she quickly made her mark in the industry. “My next step to advance my love of the creationist side of mixology was to enter a worldwide competition.” Bock entered Patrón Tequila’s 2017 Cocktail Competition, a competition showcasing mixologists from around the world whose creations are judged on appearance, originality, flavour, as well as the mixologist’s service and hosting.

“I ended up placing second in Ontario. After that I was promoted at Barchef – one of the top most innovative bars in the world, and began making cocktail programs for friends of mine. It’s been a very busy year, but a very good one.”

Bock’s craft drives her to create unique alcoholic elixirs daily – and she has shared a line up of Valentine’s Day inspired cocktails for those daring enough to try out for themselves, or a special someone: 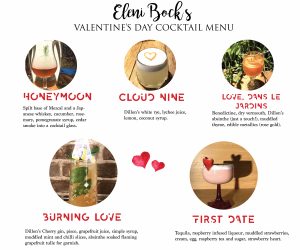 You can stay up to date on all of Bock’s creations on her Instagram.

Share on TwitterShare on FacebookShare on Linkedin
About Max Wells 0 Articles
Entertainment based Journalist at Sheridan College. You can view my articles on https://wellsmax.wixsite.com/articles and connect with me on LinkedIn.
Twitter LinkedIn