Services for people with Autism Spectrum Disorder are crucial to helping them overcome their challenges. Martin Gallagher, a Sheridan student with Autism Spectrum Disorder, and counsellors Suzyo Suman Bavi and Janice Galloway, who work with a club at Sheridan known as FACEIT, share their thoughts on how autism awareness and services have improved over the years and what still needs to be done.

What is Autism Spectrum Disorder

Autism Spectrum Disorder is a neurological developmental disorder characterized by difficulties with:

The high end of the autism spectrum was previously known as Asperger’s Syndrome until it was removed from the diagnostic criteria in 2013. All of the previous autism spectrum diagnoses are now put into a single diagnosis known as Autism Spectrum Disorder (ASD).

A timeline shows the history of the autism spectrum.

A report called Autism Spectrum Disorder Among Children and Youth in Canada was published by the Public Health Agency of Canada in March. Here are some findings.

Autism services and how they have improved

Martin Gallagher, a student at Sheridan with Autism Spectrum Disorder, explains what it is like for him to live with the disorder.

“It’s challenging finding balance between fixating and not caring at all, but I feel here at Sheridan with the resources we have, I can find that balance very easily and I can find people who are like me,” he said.

The Golden Horseshoe has many services available for families impacted by Autism Spectrum Disorder to help with challenges.

This map shows the facilities which provide services to families impacted by Autism Spectrum Disorder. 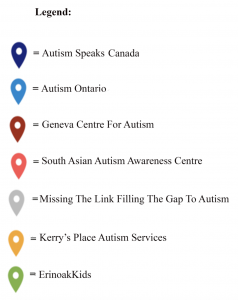 Suzyo Suman Bavi, a counsellor at Sheridan College, explains how services have improved over the years.

Bavi is especially pleased with the campaigns on autism awareness as well as the organizations that offer job opportunities to students with disabilities, including Autism Spectrum Disorder.

“We do have a couple of organizations that have come on campus here, trying to offer job opportunities, so I think that is a step in the right direction,” he said.

Bavi is also pleased with how more students with Autism Spectrum Disorder have been entering post-secondary institutions in recent years.

Gallagher and Bavi take part in a club at Sheridan specifically for people with Autism Spectrum Disorder, known as the FACEIT club. Gallagher is going to become the student president of the club for the 2018-2019 school year. Bavi assists Janice Galloway, a counsellor who currently runs the club.

Galloway explains what the club is and how it helps people with Autism Spectrum Disorder .

“It’s a club where students are able to themselves. They find themselves in a safe space and can be there together working on skills that they may find challenging,” she said. “It is run by Accessible Learning.”

Galloway adds that many students with Autism Spectrum Disorder feel isolated when they first enter Sheridan, and the group has helped them overcome this challenge.

“Finding the club has helped them come out and identify themselves and promote understanding and acceptance of students on the autism spectrum here at Sheridan, and that is a huge positive impact that has lead our community here at Sheridan to that understanding,” she said.

What can still be improved with autism services

Gallagher, Bavi, and Galloway feel that there is still room for improvement when it comes to autism services, particularly in terms of helping employers, teachers, and the general population on how to support people with Autism Spectrum Disorder.

One of Bavi’s concerns is how post-secondary faculty may not always understand Autism Spectrum Disorder, as he explains in the video below.

“Sometimes, they don’t know what to do when they see certain behaviours and how to respond and how to support the students,” he said. “I think there is a gap where we need to purposely educate and equip faculty on how they can support students on the spectrum.”

One of Galloway’s concerns is how difficult finding employment can be for people with Autism Spectrum Disorder because of their difficulties with interviewing skills when it comes to eye contact, as she explains in the video below.

“A lot of interviewing is part of eye contact,” she said. “I know a lot of what I’ve heard is students get told ‘You’re not looking me in the eye’ and people find that becomes that barrier to the interview because people who are interviewing them may not understand that this is just something that is not what they are intentionally doing.”

For more information on Autism Spectrum Disorder and its services, visit:

Missing Links to Filling the Gaps to Autism

Share on TwitterShare on FacebookShare on Linkedin
About Cory Morrison 0 Articles
Cory Morrison is a second-year Journalism student at Sheridan College. He has well-known passions for writing and weather reporting. His passions for these two things inspired him to enroll in Sheridan's Journalism program. He also has autism spectrum disorder.

Two years after stepping down from the CEO position, and less than a year after retiring from the board of directors, Bob Iger has returned […]

Movies and tv shows play a significant role in our lives, making it important to recognize the people that bring these stories to the big […]