Sheridan students got to experience first-hand the dangers of impaired driving at an interactive demonstration by MADD Halton at Davis Campus.

Navnit Singh, awareness coordinator for the SSU, teamed up with Mothers Against Drunk Driving (MADD) Halton to organize MADD Stop Impaired Driving for students on Nov. 19 and 20 at Union Square.

Singh says she wanted to set up this event after MADD contacted her about collaborating with them to raise awareness about impaired driving.

MADD Canada is a registered Canadian charitable organization that is powered by volunteers. Their mission is to stop impaired driving and support all victims of the crime. They believe that impaired driving crashes are not an accident—that it is an individual’s decision to get behind the wheel when under the influence of alcohol and drugs.

Students were able to try some of the activities that let them experience how being impaired by drugs/alcohol could affect their performance. MADD had goggles for different types of impairment such as alcohol, marijuana, ecstasy, prescription drugs and a few more.

“Because they’re sober when they’re trying on the impaired goggles they’re seeing first hand while they’re sober and in a clear state of mind just how bad their vision is. Through the little mini games that we’ve put together they’re seeing how bad their vision and focus is, which will make them think twice. And if that doesn’t, this poster that we have showing all the victims that got injured or died because of this will be a shock to them as well as the stats and information we’re giving them on the fees and charges that you get,” Singh says.

Students were given goggles and asked to walk a straight line to demonstrate how difficult it is to be accurate and stay on the line. The goggles represent how your vison and focus is when you’re impaired. When students finished walking and removed the goggles they realized how far they were from the line.

Hunter Kennedy, first-year student in Electrical Techniques, says he already knew that impaired driving wasn’t safe but after trying those goggles he knew there was no way anyone could drive like that. “I couldn’t even walk straight,” he says.

Nicola Paris, director of volunteers at MADD Halton, says “an average of three and a half Canadians a day are killed by impaired driving.”

Many people don’t realize what fines and charges they would be facing when they decide to drive while impaired, especially with marijuana recently being legalized. The government of Canada introduced new impaired driving legislation for all transportation offences, including impaired driving in Canada. These charts outline the penalties an individual will face for certain levels if they get caught for alcohol or drug impaired driving. 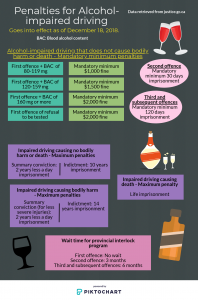 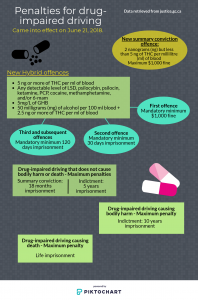 “Under 25, so 16-25, is the highest demographic for deaths by road crashes. So, 33 per cent of all of those are by impaired driving, so one third. So we all know we tend to get all like—woohoo, got my license—and we’re a little heavy on the foot or we’re showing off to friends or whatever so, unfortunately that demographic is very represented in road crashes. It is the leading cause of death for people of your age group. But, 33 per cent of those crashes are ones that could be completely preventable if they weren’t for impaired charge,” Paris says. “We’re finding the majority of it is not impairment by alcohol, it is impairment by drugs for your age group,” she added.

During the event the association also offered pens, lip balm, brochures to spread awareness about MADD and ribbons for students to wear. By wearing a ribbon people know that they can trust your decisions, especially when they’re getting into your car for a ride.

MADD Canada encourages the community to volunteer. Anyone who wants to join can visit their site to apply.