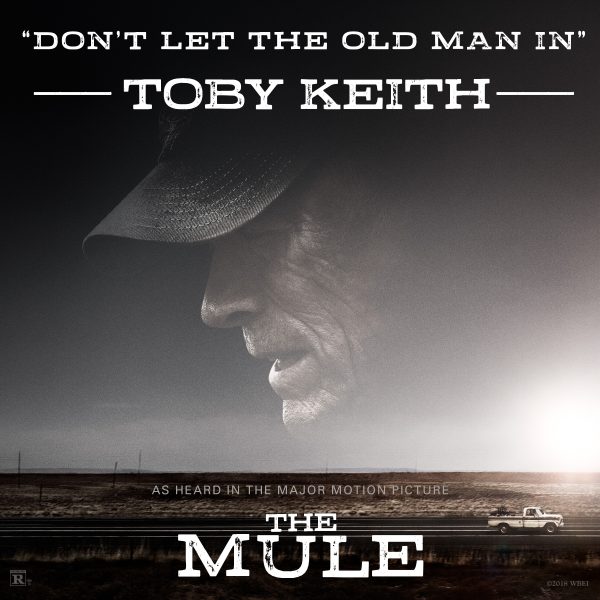 The Mule is a 2018 crime drama, written, directed and starring Clint Eastwood. The film follows Earl Stone, a 90-year-old Korean War veteran and horticulturist. Earl falls on hard times financially and is about to lose his horticulture business.

At his granddaughter’s rehearsal dinner, Earl is approached by a young Hispanic man and they talk about Earl’s driving history. They talk about how Earl has driven all over the United States and has a spotless driving record. Given his age, race and driving record, the young man says Earl is just the type of driver his employers (The Cartel) are looking for.

Earl thinks he’s just moving some packages for some young men, but after getting paid thousands in cash, he gets curious. Around the fifth trip he checks the bags he’s delivering and discovers he’s a drug mule. Over time, he actually bonds with some of the cartel members and they even start calling him Tata (grandfather). As time goes on, the Drug Enforcement Agency cracks down on the cartel and things come to a head at the end.

The movie is no Gran Torino, but it’s just as good, because it’s Clint Eastwood. No matter what movie you put him in, or how old he is, he’s still Clint Eastwood. He really uses his advanced age to work well with this film, while still being a badass. Eastwood could be 100 years old and still not take any of your shit. What else is great is that there is no political correctness or political agenda in this movie like there is in so many others today, which is refreshing.

There’s a scene in the movie where Earl tries to help some young men with their motorcycles only to find out they’re women, or “dykes on bikes” as they refer to themselves. Earl gives them advice on how to fix their bikes, the women say “thanks grandpa” and Earl says “no problem dykes”, everyone’s happy. The riffing and the jokes about being super old are great and really funny when they land.

The Mule is a good change of pace from the normal politicized Hollywood elite movies of today. It’s nice to see that Clint’s still got it at 88.