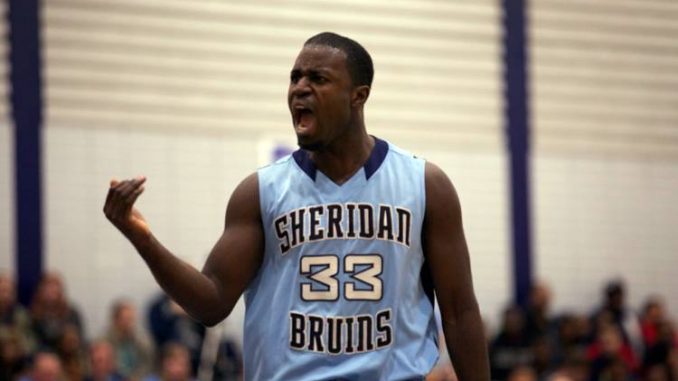 Brian Owusu, a third-year Sheridan Bruins basketball player, credits the sport with helping him as a child growing up in a rough neighbourhood in Mississauga.

“My area was pretty rough growing up in Mississauga. It was subsidized housing so there was some stuff I was exposed to early on like drugs and crime,” the 27-year old forward said.

He credits his older brother, Isaac, for putting a basketball in his hands, helping him to avoid bad influences.

“My older brother got me into ball,” Owusu said. “He played growing up too.”

Owusu went to St. Francis Xavier Secondary School, where he played high school basketball for four years. After graduating in 2008, he went off to Laurentian University in Sudbury for sociology. He finished that program in 2011, but did not want to pursue a career in that field.

“I was at a crossroad, but I had to do what made me happy instead of what others expected of me, so I decided to focus on basketball and fitness,” Owusu said.

Following those three years at Laurentian, Owusu followed his heart.

“I trained. I knew I wanted to play (basketball) so I felt I should be ready for whichever opportunity came, whenever it came. I also started working at the gym I was training at as a fitness instructor,” he added.

In 2014, Owusu decided to enroll at Sheridan in the Business Admin Finance program. Here, he began playing basketball competitively again.

“I knew a few guys on the team and they spoke to (Jim) Flack and put me in contact with him,” he said. “He remembered me from high school and he invited me to training camp.”

In his first season with the Bruins, the men’s team finished with an Ontario Colleges Athletic Association (OCAA) record of 7-11.

“That year definitely changed me as a person and as a player,” Owusu said. “I had to get in better shape and I had to learn that a winning attitude and team chemistry were extremely important to be a good team, even more important than individual talent.”

Dylan Periana, who was named the team’s MVP at the athletic banquet last season, has been his teammate for more than a year.

“I showed up to the first day of practice last season and we quickly got acquainted on the court,” Periana said. “I thought he was really good and was happy he was on my team.”

Last season, in his second year with the team, Owusu was named as an OCAA Men’s Basketball West Division Second-Team All-Star, averaging over 17 points per game. Along with the impressive numbers, he brings other qualities to the team that do not show up on the stat sheet.

Jamar Parkinson, a third-year Bruin, has been Owusu’s teammate at Sheridan since Day 1.

“Brian brings leadership to the team. He’s mature so he can help the younger guys understand what the coaches want from players,” Parkinson said. “He’s very confident and that rubs off on the team.”

Owusu also makes an impact off the court.

“He’s helped me remain focused in school. With school and athletics, it can be a lot to handle, but he showed me how to manage my time,” Parkinson added. “Even going to the library together to work assignments, he’s there to help you if you need it.”

“We have a really good team and I feel we have a chance to win a national championship, which is my goal since I’ve been here,” Owusu said. “So there is a lot of motivation to take this season very seriously and give it everything I have.”

Along with having his eyes set on a championship, Owusu will value these last few moments with his team.

“I’m gonna miss a lot. Just playing basketball, being around my teammates and coaches every day, and playing at Sheridan means a little more than playing at most schools,” Owusu said. “There’s a great sense of pride and tradition here, which makes it really fun to play here.”

When his time at the college is over, Owusu is looking forward to pursuing his educational and career ambitions.

“Finishing my diploma, then doing the degree, getting my masters, and then a CFA (Chartered Financial Analyst),” Owusu lists as his future goals. “I’m looking to further my career in the banking industry and eventually run my own financial planning firm.”

He will be closing a chapter in his life by the end of this school year and if he were to talk to his younger self growing up in Mississauga, he would tell him to “work hard and believe in yourself, set goals and work to achieve them because anything is possible.”