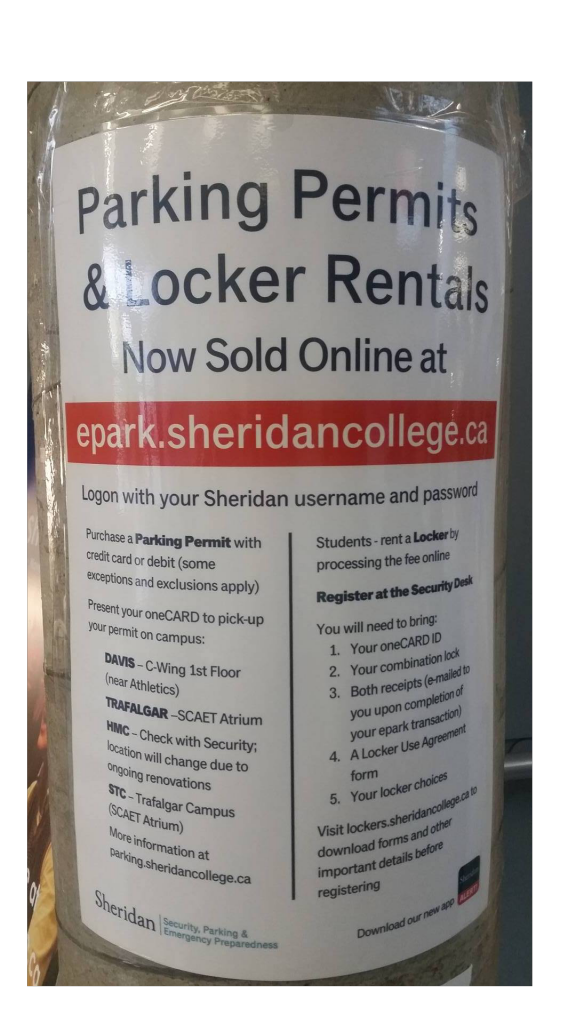 Sheridan College campuses saw many changes over the summer with construction and renovations, but the one that has students talking is the new rental fee for lockers. Many students are struggling to understand why Sheridan is now charging for something that last semester was free.

“The decision was made to charge a nominal fee for locker rentals in order to manage and recuperate some of the expense of locker maintenance and administration.

“To provide context, students are notified upon registering for a locker that they must remove their lock and contents at the end of the winter term in April,” he said in an email.  “They are notified again two weeks prior to end of term (by way of posters on the lockers). In spite of this notice, many students abandon their lockers with the lock remaining. For example, this past April, Security cutoff over 500 locks at one campus (representing approx. 1/3 of the lockers). Most lockers were empty, however, Security was responsible for bagging and storing the contents of approximately 150 of the 500 lockers for 30 days and subsequently, sorted and recycled or repurposed most of the material as very little was reclaimed.”

The price for lockers used to be in the cost of tuition but with Sheridan’s increasing enrollment – now approximately 21,000 full-time students and 17,000 part-time students across three campuses – there are not enough lockers. This sparked Sheridan to charge students for them.

To register for a locker students must visit epark.sheridancollege.ca/.

Locker registrations are under “permit types” and there are three different payment options for lockers: $15 for one semester, $25 for two semesters and $35 for three semesters.

Some people are angry about the change to the policy. Many students have come to realize that even with a locker, they still don’t have enough room for their equipment. Art students need specially designed lockers for their portfolio bags, but they have discovered that they are  not deep enough and they end up crushing their work. Which makes students not want to purchase lockers and carry around their equipment or work.

“At present, yes – there is a decrease in occupancy this year over last year. However, with the colder weather approaching, we anticipate additional locker rentals in the winter term as students will need a place to store their outerwear and other belongings,” says Burjaw.

Film students have noticed that the equipment they rent won’t fit inside their locker and will now have to carry heavy cameras, tripods and lighting kits around with them instead of being able to use the storage that they must pay for.

People are still in need of lockers and are still willing to spend the money to rent them while others opted out. Michael Irulli , Bachelor Of Film and Television student said, “It’s unreasonable. The expense of living is too much…we already pay enough. I spent all my savings on one semester alone. What I have left I’m not going to spend on anything if I don’t have to.”

Students who commute and live far from home need a place to store heavy bags, equipment or even gym gear.

Dan Lizardo, a Bachelor Of Interaction Design student, voiced his complaint. “Well it’s a waste of time for everyone to the point where they need to hire extra staff. You have to go out of your way to get the damn thing, and then on top of that it costs $25 compared to last year where it was free and all you needed to do was tell them what locker you chose.”

“Since I don’t have car or live near I don’t have anywhere to put my gym bag or any of my work. Or else I would end up carrying like three bags, which I was doing during the first week of school.”