Passionate, hardworking and team player are only a few characteristics that people associate with Bruin of the week Amanda Manley. No.2 on the roster but No.1 on the court, this middle is unstoppable.

For the past 10 years Manley has played volleyball. When she was 10 she quickly realized that volleyball would become a very large aspect of her life. Playing through public school and high school, she was also playing club volleyball on the Georgetown Impact team. She was a part of the Impact team for four years and played one year for the Mountain Volleyball Club. Manley knew she did not want to stop there.

“I was playing club volleyball in 18u with MVC and we were invited to come practise with the Sheridan team. I knew I wanted to go to college because originally I wanted to do interior design. Scott Hunt, the head coach, gave his information and a Sheridan book to my coach to pass on to me,” said Manley. “I did more research on Sheridan and found the Kinesiology program and found that it was not only a great for school but a great fit for volleyball.”

This is Manley’s second year playing on the Sheridan Bruins women’s volleyball team and she could not be enjoying it more. Despite all the good times on the court, she has experienced some bad times as well.

“The hardest time was dealing with concussions and other injuries. I have taken a couple hard hits to the head which have been scary. I love this sport so it doesn’t stop me from playing but I am very careful.”

With a competitive heart, Manley has never let the hard times stop her from improving her game, which led her to winning an award in her first year o 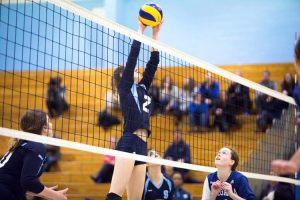 “My proudest moment was winning the coaches’ award last year at the athletic banquet. It meant a lot winning that as a first year player and it felt really good after working so hard to get to the college volleyball level,”  Manley said.

Competitive college volleyball is no easy game. With three practices a week, travelling near and far on weekends while balancing school, teammates look to each other for support and guidance but also look to family.

Lorie Manley has always been by her daughter’s side. She was quick to answer when she was asked what her favourite thing about being a Lady Bruin’s mom is.“Watching her play and the pride I feel watching her play a sport she loves,” she said enthusiastically.

“I started to develop a passion for volleyball as soon as I started playing. I had played competitive sports all my life and no matter what other sport I was playing I always wanted to be playing volleyball instead.”Manley said.

With the drive and dedication she demonstrates on and off the court, it is no wonder Manley is the featured Lady Bruin of the week.