Most students at Sheridan don’t understand how using their OneCard will benefit them.

“Having your identification on campus is huge, in terms of security, making students feel safe on campus with those random ID checks that’s one level of it,” OneCard officer Nicole Hofman says. “The other level is the convenience of being able to use it anywhere on campus.”

Aside from identification and access to printers on campus there is more to OneCard. The perks are only limited by the amount of money you load on your card. “You don’t have to worry about monthly charges. The money that you put on there is yours and you use it however you want to use it,” says Hofman.

You can add funds to your card online with debit or credit and in-person at any OneCard office location. Loading funds to your OneCard only began in 2015. To encourage students and faculty to use their card, OneCard has implemented various exclusive offers. 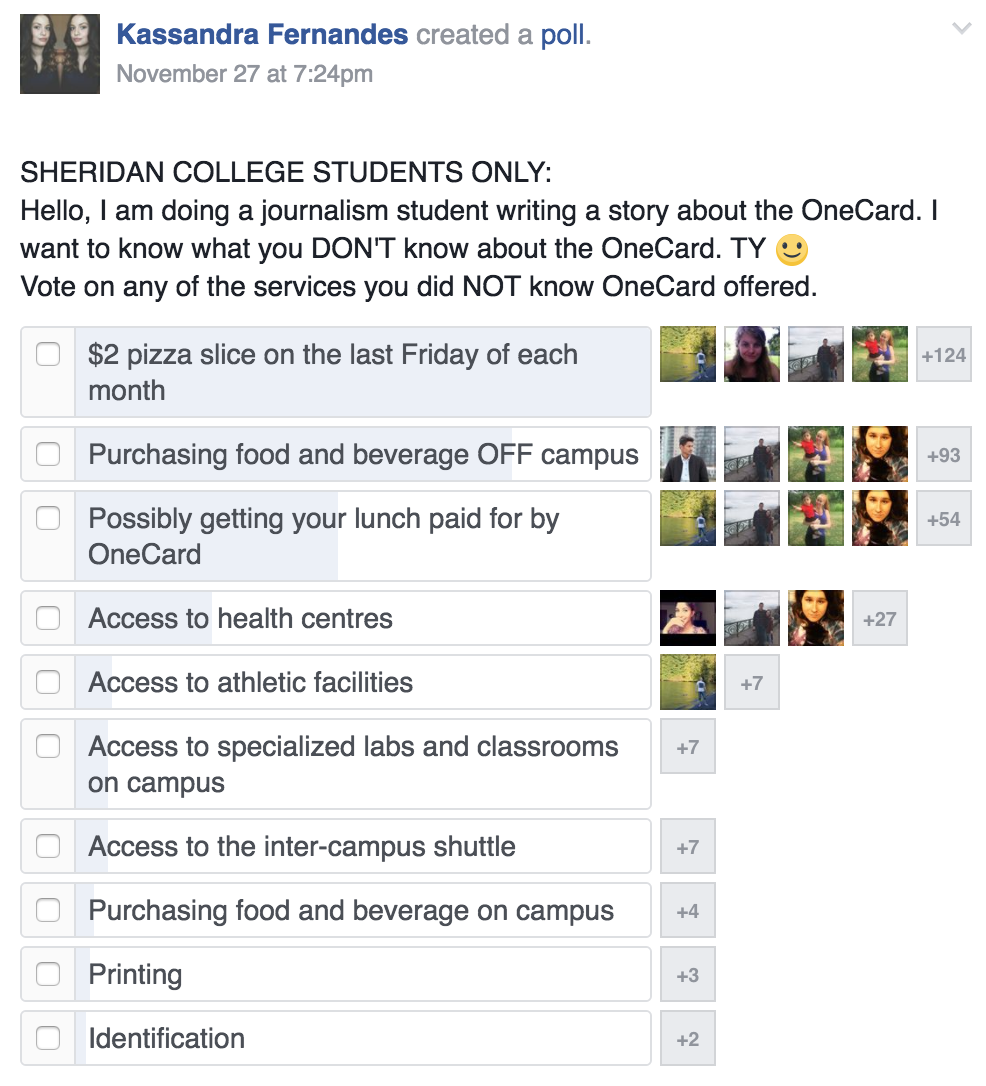 A poll posted on a Sheridan College Facebook page suggests that most students did not know you could buy a slice of pizza from Pizza Pizza for $2 on the last Friday of every month.  “If you get a vegetarian, cheese or pepperoni slice it’s only $2 if you tap to pay with your OneCard,” OneCard street team member Kaitlyn Roy says.

Students were also unaware that they could use their OneCard off campus. Hofman explains that they have just rolled out OneCard payments at Monaghan’s and Habanero across the street from Trafalgar Campus. OneCard users are not allowed to purchase alcohol at Monaghan’s while Habanero offers a student deal to those paying with OneCard.

According to Hofman, more off-campus vendors will begin to accept OneCard as payment but she cannot divulge which ones. “We have been talking to a lot of other off-campus vendors for all of the other campuses as well.” Hofman says. “We do have a handful of people who are extremely interested in working with us and they will be putting together student specials as well.”

Another little-known perk of the card is the chance to become OneCard’s mystery winner. “The promo team will be out on campus and when we’ve noticed a student or staff member paying with their OneCard we’ll pay for them,” Roy says. She explains that this program promotes use of the OneCard while brightening up somebody’s day.

Most students have missed out on various OneCard promotions because they did not know they existed. “I think it just comes with having something new on campus but hopefully with our street team, and with our social media that has been blasting like crazy, the information can get out to students through media and word of mouth,” Hofman says.

The OneCard administrative staff is readily available for student inquiries at each of the Sheridan campuses. Chances are that if you are going into the OneCard office, you already know of some of the areas you can use your card. Hofman overcame that obstacle by creating the OneCard street team to reach out to students that are not coming into the office.

The role of the OneCard street team is to promote OneCard services at Sheridan that students may have never known about. “The street team does an amazing job of going out and talking to students, finding them in spaces where they might use their card,” Hofman says, “Whether it’s the cafeteria, whether it’s the library or the commons…Wherever it may be, just to get on that personal level with students.”

Exclusive promotions and other OneCard information are routinely posted to the Sheridan OneCard Instagram. The Instagram is student-run and contains posts made by the OneCard street team. “We can only spread word of mouth so quickly, with the Instagram account we are able to reach more students quicker,” Roy says.

OneCard is open to feedback to improve its services. According to Hofman they continue to get to know the student body and what kind of promotions they’d be most responsive to in the future. “If we see interest in those specials we have the ability to go and get more specials for the students because it’s so new we have to find what is interesting for the students,” Hofman says.