On Friday evening, the arena was filled with hundreds of synchronized skating fans from all over the world to support their teams.

The first Russian team performed their inspirational short program on “Prayer in the Night” and had a best score of the evening with 62.55. The choice of costumes emphasized the theme, with half of the girls having white angel wings on their backs and the other half wearing black wings to represent the evil of the night. Junost sat in second place behind their country rivals Crystal Ice (Team Russia 1) by 0.21 points.

“After the short program, we didn’t think about place and goals, we concentrated on presenting a good and clean performance. Our aim was to beat ourselves,” said Junost team member Anastasia Shirokova.

Crystal Ice was anticipating the medal but had a rough free program day on March 11. Seven falls and nine deductions left them in a disappointing eighth place finish overall. Despite their misfortune, they left the crowd on their feet. Their artistry and the beautiful performance to Beethoven’s 5 Secret left everyone moved.

The junior world title has been a long time coming for Russia. Junost has earned 15 national titles since 2002, and captured the bronze last season at the 2016 Junior World Challenge Cup in the capital city of Croatia.

“It was a really strained season because of the struggle between Russian teams. Unfortunately, it was the first time we had become the second national team of Russia,” said Shirokova. “But for us that only meant that we got a lot of job to do before heading to Worlds.”

They closed off the competition on Saturday night with Stravinsky’s “Firebird. The athletes told a story about the proud, lordly, untouchable bird, whose feather brings luck and happiness. Their clean skate on a last day of competitions earned them 106.49 points, a total of 168.83 overall – their best score of the season.

“It was the greatest moment of my life,” said Junost skater Anna Negasheva. “We came a long way. It was difficult, and there was lots of training, lots of crying, and of course some laughter. I don’t know what to say except that it’s unbelievable. It’s unforgettable. It’s perfect.”

First Finnish team Fintastic finished in the Top 4 in the free program and the short program score was enough to go up from bronze position to silver overall, and Musketeers (Finland 2) from fourth to bronze. 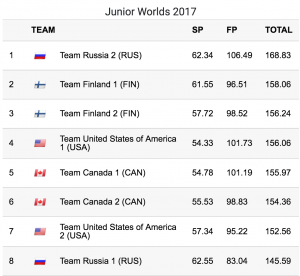 Both Canadian teams were lucky to perform in front of the home crowd at Hershey Centre. Trying not to leave a single point on the table of the judges and hoping to move up in the final rankings, Canada 1 (Nexxice) placed fifth after skating their clean, breathtaking long program. The reigning World champions Les Suprêmes finished sixth, leaving them behind Canada 1.