An enthusiastic crowd gathered in The Marquee at Sheridan College to hear the long awaited 2017 Tony nominations. Come From Away , the acclaimed musical that got its start at Sheridan, was nominated for 7 Tony awards. 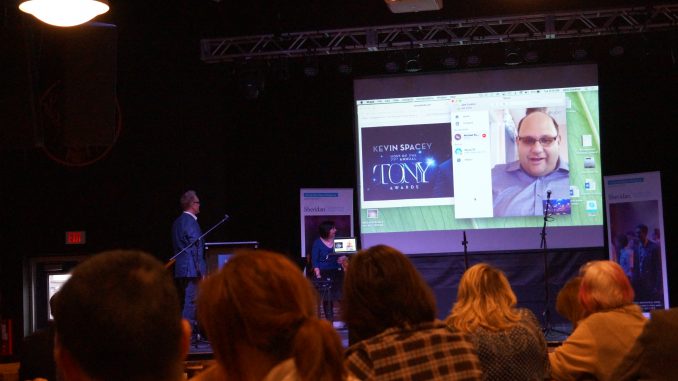 Michael Rubinoff, the Associate Dean of Visual and Preforming Arts, connected with the staff, students, and alumni through a video link from Newfoundland.

“Only five Canadian musicals have made it to Broadway. It is very special that our students played a significant role in launching one of these musicals,” says Rubinoff

Come From Away is a musical about the events that unfolded in Gander Newfoundland during the tragic event, 38 planes carrying 6,579 passengers were halted in the remote town.  The local people of Gander graciously opened up their homes and hearts to the stranded strangers. The travelers who landed in that little town were said by the locals as “come from away.”
Rubinoff approached Irene Sankoff and David Hein to write the musical.

“We believe we’re the first post-secondary institution in the history of the Tony Awards, and certainly the only Canadian one to have a Tony Award nomination for best musical, to our name,” says Dr. Mary Preece President and Vice Chancellor of Sheridan.

The Tony awards will be held June 11, 2017 and will be presented in New York City at Radio City Music Hall.

Come From Away hits the Sheridan stage