For adap.t and o.blivixus, two Toronto based photographers who for legal reasons prefer to be unnamed, the passion, excitement and thrill of being on a roof is something they’ve recently discovered.

“We’ve been doing this for about six months now,” said adap.t. “It’s kind of weird actually, we didn’t know anything about it at first and it seemed so impossible but one day we were like let’s hit a roof.”

Now with countless hours of experience and a fan base that’s constantly growing, the two are always looking to improve their shots and capture the city in ways no one has seen before.

“Every time I hit a roof I think to myself ‘What’s something I can do to make the city look cool,’ ” said adap.t. “It takes a long time to figure it out and I’m still learning. There’s been times where I’d finish up and leave and then realize that I should have done things differently, so it’s important to go into a mission with a game plan.”

With a wealth of knowledge when it comes to entry, the photographers are able to access the roofs and although it’s very dangerous and considered illegal, the two understand the repercussions that come with their hobby.

“When were up there we don’t think about anything else,” said o.blivixus. “We’re smart about it and know our limits, but even if we did get caught I’d still be glad that we did it.”

With millions of people living in and visiting the beautiful city every day the two feel lucky to be able to do what they and see what they see.

“It’s crazy to think how we’ve seen places and views that people will never be able to see,” said o.blivixus. “It’s like we go up there, take these photos and share them so people can see their city from a different perspective. We capture the city for the people of the city.” 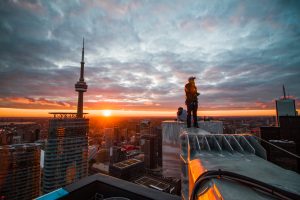 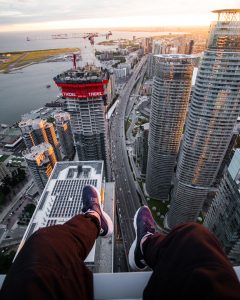 Having started from nothing to now having well over 1,000 followers on Instagram, the two admit it’s crazy to look back and think about what they’ve accomplished in such a short time.

“I remember this one time I went up to a security guard and asked him to take us to the roof to take pictures, and he looked at me like I was dumb,” said adap.t. “So, we’ve screwed up many times, gone through struggles of being caught and getting yelled at, but you have to screw up in order to learn.”

Looking into the future the two have no aspirations of making money, they just want to go out and have fun with it and experience different places. 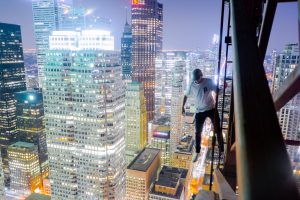 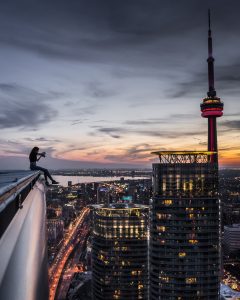 “I just love doing this,” said o.blivixus. “We have a plan to go to China next year and hit up some of the amazing roofs they have there.”

With a growing community of rooftop photographers coming up in Toronto, the two have already made their mark on the scene as top-notch photographers.

“The people we used to look up to now follow us, like our pictures and message us to shoot, so it’s crazy,” said adap.t. “Everyone has their own thing and this is ours.”

For urban exploration shooting like we do it’s always a good idea to have a wide angle lens. You can see and capture so much in a shot and it’s weird to say but it does make the buildings look taller because it pushes everything away. We use this lens for the shots of our feet dangling off the ledge.

adap.t and o.blivixus: You want to keep your bag as light as possible. You never know when you’ll have to run away from security or take the stairs.