The boost is a response to last year’s Naylor Report, which showed that Canada was falling far behind other countries scientifically and made a number of recommendations.

The measure has been applauded by the Canadian scientific community.

“It signals that the government gets it,” said Gail Krantzberg of the Centre for Engineering and Public Policy. “Research doesn’t happen just because faculty do research, they hire masters, PhD students. It means young people get hired.”

The measure has been fairly well received on both sides of the aisle, but Conservatives have voiced concern over the worsening of the budget deficit. 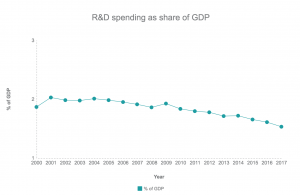 “At the end of the day it’s great to support science, we’ll continue to support fundamental science research, but we’ve just got to make sure we’re having a good balance of it all,” said Conservative Shadow Minister for Science Matt Jeneroux.

Overall the budget is still very popular among scientists.

“From my perspective, it’s an increase, it’s a good thing… It could always have been more, but there are all sorts of different priorities pulling on budget strings for attention.

“So the fact the science research made it through the gate to get more funding is a positive outcome,” said Krantzberg.