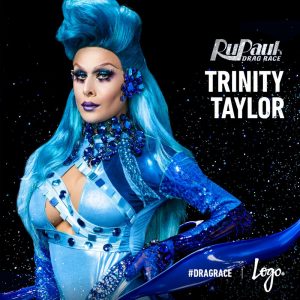 Trinity (the Tuck) Taylor has a message for young drag queens and all of their squirrel friends.

Season 10 of RuPaul’s Drag Race (RPDR) has just taken off and a Top 3 finalist of season 9 wants young fans to know all of the experience in the world will not prepare you for what to expect in the Drag Race competition.

She says that confidence is key and those who stay true to themselves will be successful in the industry.

“I was already a successful entertainer in the industry. I won more than 20 pageant titles including two national contests and travelled across the country with an international band as a drag backup dancer. Even with all that experience, I didn’t know what to expect from the Drag Race competition,” says Taylor.

She says that while being on RPDR she felt a lot of different emotions, but overall it was challenging and gratifying at the end of the day.

Taylor thinks that the world’s perspective on drag is changing as it becomes more talked about.

“I think that people are scared and perplexed with things that they are uneducated in. Now that drag is going mainstream, more people are learning and opening up to the ideas of art and expression that they weren’t willing to open up to before,” says Taylor.

She says that she wants young queens to stay focused if this is something they really want to do for a job and invest in.

Adrianna Exposée, is a successful drag queen in Toronto and Ottawa, and Sheridan College alumni. She says that being able to watch RPDR has helped her become more confident in pursuing drag as a career.

“I started doing drag in February 2017. It all started when I saw a banged out wig and thought, ‘That’s what I would wear if I were a girl’. From there, I started prasticing dancing to Britney Spears in high-heels every night,” says Exposée.

Exposée says that she was impressed by the steps Sheridan has taken toward including drag into student culture. However, seeing professional drag through platforms like RPDR has helped her the most.

“It is something that I feel motivates me when my creativity drains. My biggest inspiration from the show is the presentation. It showed me that the queens who are the most successful are the ones who are real, determined, and not hyper-aware of their audience,” says Exposée.

Exposée says that young people looking to start doing drag to know what you want out of it.

“Some (queens) like the thrill of dressing up and going out, some like to perform, and some view it as an art piece. It is important to understand what you are trying to portray because once she is out in the world, it’s difficult to change her image,” says Exposée.

She also thinks it is important to have role models in drag. Trinity Taylor was her favourite queen in Season 9 and she still keeps up with her online to this day.

“There are few queens that are open about having cosmetic surgery and (by addressing this) she has helped remove the stigmatism surrounding it. If I could have any queens body, it would be hers. Trinity is very polished and has a distinct look which wouldn’t work for anyone else,” says Exposée. 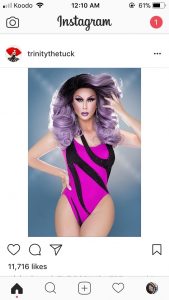 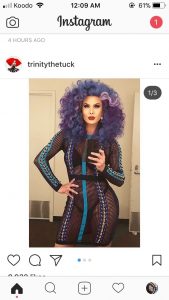 Trinity’s look has evolved since she was on RPDR. These are some of her recent Instagram posts.

Drag is so much more than a man dressing up as a woman according to Taylor. Her main message to young queens is to be who you are.

“Stay focused. If this is something that you want to do for a job and invest in, be yourself and find your own voice in this business,” says Taylor.