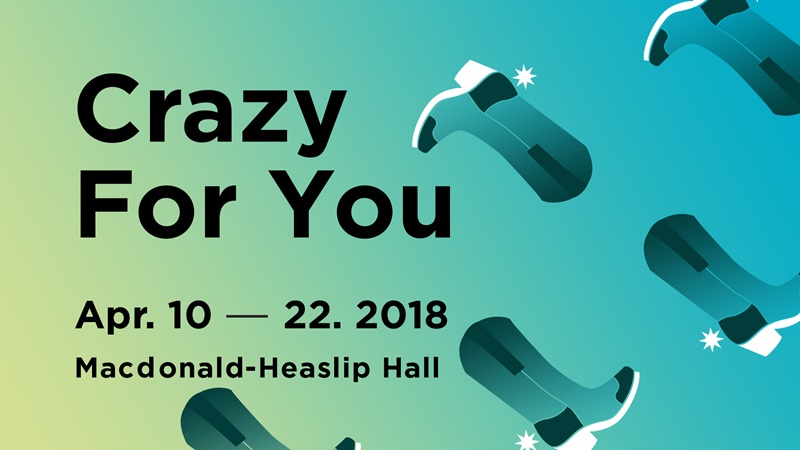 Crazy For You is among the most likeable and whimsical musicals of the last 25 years. The new production now playing at Theatre Sheridan’s Macdonald-Heaslip Hall plays into those strengths. It’s the most fun the company – and the audience – have had all season.

The obvious problem, however, is how uncreative the production is. If you’ve seen the show before, there’s nothing worth seeing beyond some of Sheridan’s talented student performers. The concept and design of the show is completely unoriginal.

With such an uninteresting staging, it’s a good thing the music picks up the slack. The show is made entirely of songs from George and Ira Gershwin, spanning their entire careers. It’s remarkable how these catchy songs, including “Nice Work if You Can Get It” and “Someone to Watch Over Me,” have held up nearly 100 years.

Based on the Gershwin songbook and a story by Ken Ludwig, the story follows banker/aspiring dancer Bobby Child as he goes from New York to desert Nevada to foreclose a theatre. After arriving in the classic western town, he falls in love with the theatre owner’s daughter Polly. Together, they decide to put on a show and save the theatre.

There’s a grand “let’s-put-on-a-show” bravura that keeps the energy up for most of the play. But the story is far more entertaining than that showbiz allure and songs. Ludwig’s book is hysterically funny and the cast knows how to perform every part of it.

Any production of Crazy For You lives or dies on the shoulders of who plays Bobby and Polly. Thankfully, Braeden Woods and Meghan Caine are supernova talents that command the show from start to finish.

Woods’ Bobby has a zany stage presence and a killer tap dance routine. Caine’s Polly shows a tender vulnerability when acting and has a dynamite voice to match. Most importantly, they can both dance their hearts out. This starry duo is the show’s highlight by a mile.

The rest of the ensemble is just as entertaining – especially as comedians and dancers. I haven’t laughed so hard at Theatre Sheridan in years, even though I knew the punchlines. The dance numbers are remarkable too; Act 1 numbers like “Slap That Bass” and the dizzying, nine-minute “I Got Rhythm” are showstoppers.

Choreography is also done by director Julie Tomaino. She hits every major style of Broadway dance throughout the night, and her movement is as versatile as the company. Sadly, her dancing as is focused as her direction of the musical is misguided.

There’s been six productions of Crazy For You in the Oakville area since 2009, and Tomaino’s is filled with the same staging and little flourishes as the rest of them. It’s uncreative and lazy using moments from other productions.

The list kept growing throughout the night: Someone shoots the cuckoo clock. Bobby has his finger gag describing him and Bela Zangler. Moose spins the bass to end “Slap that Bass.” The flag waves to end “Stiff Upper Lip” in a parody of Les Miserables.

When she directs original comedic routines, they run too long so the joke becomes awkward. Both bar fight scenes and one mirror routine between Bobby and another character make the first 15 minutes of Act 2 feel like an eternity. (The whole first act is sharper and funnier than the second.)

This show lives on razzmatazz and spectacle. The show’s ensemble has it. You can see the love of performing in their eyes. The lights, set and direction don’t have this. It’s hard not to enjoy such a likeable book and score – but it feels shallow without a clear director.

By the end of the night, there’s enough captivating and charming dances with bright tunes the audience is won over by the ensemble’s enthusiasm. And to Tomaino’s credit, there are two gimmicks which do play well. There’s a tumbleweed and a hotel sign that elicit big laughs from the audience.

If you haven’t got tickets and you’re looking for a gleeful, toe-tapping night, Crazy For You has you covered. I’d also suggest buying tickets in the upstairs balcony. Most of the routines and jokes are at floor level and straight ahead; you’ll miss them from rows C-E.

The production may be unoriginal, but there’s more than enough to put a smile on the audience’s face. And I’m crazy for a great night of brimming musical theatre.

Crazy For You
2 1/2 out of 4 Stars
Music and Lyrics by George and Ira Gershwin. Book by Ken Ludwig.
Ages 6 and Up. 2hrs 40mins. Musical Comedy Western.
Directed by Julie Tomaino.

Share on TwitterShare on FacebookShare on Linkedin
About Tyler Collins 0 Articles
Tyler Collins is a current Journalism student at Sheridan College in Oakville. He is also the film and theatre critic and reporter for OakvilleNews.Org. You can follow him on Twitter @MrTyCollins.
Facebook Twitter LinkedIn