The Student Union is holding a board of directors election process online. Students who are interested in applying should go to the SSU website.

Enrique Ponce, president of the SSU, explained the duties and what students looking to apply should expect. 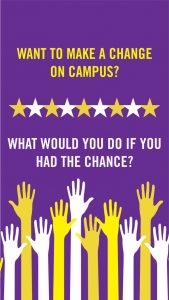 “Right now we are having a by-election for the board of directors and we have four positions at each campus,” Ponce explains. “The most important position within our organization.” At the moment there are four total positions throughout the three campuses.

Ponce himself reports to the board of directors, which is in charge of important decision making. “Any sort of high-end decision making goes through them.” Students who apply for this position are the ones leading the student union and have a lot of responsibility.

The SSU wants encourages students to step forward and apply for these positions to enhance the student experience and give students an opportunity.

Ponce uses himself as an example for students who think they are unfit to apply as a means to relate to them and hopefully encourage students to apply.

“For me, it is such a huge personal growth opportunity because I was a different person back then to who I am now.” Ponce explains how he has seen a difference within himself since becoming a student leader and says it gave him a chance to grow his confidence and his network.

“It is not a paid position, but they get an honorarium per semester.” In the end, this position does pay out, however not on a per hour basis according to Ponce.

“They are accountable for two four -hour meetings per month, and that’s where they really need to be engaged and invested because some of the decisions are crazy,” Ponce states.

Students on the board of directors get paid at the end of each semester. “Some of the decisions include approving a new building, some of them is approving a multi-million dollar project.” That includes keeping Ponce and the rest of the student union accountable.

“Anything over $20,000 has to get approval from them.” Ponce says this senior level position is one of the best ways to get exposure to these situations. When looking for applicants Ponce says “We’re looking to see do they have that passion, do they have enthusiasm, have they been engaged before?” If students are involved in clubs or extra-curricular activities they are considered to be a top candidate for the board of governors.

Some requirements for this position include: maintaining a 2.5 GPA (First term students who do not yet have a GPA are considered to be in good academic standing) and being enrolled full time for the academic year. This is a good chance for students to get themselves involved with the Sheridan community. The deadline for applications is on Oct. 4. Students who are interested in becoming a student leader on the board of directors can go to the SSU website.