The Sheridan Student Union (SSU) has called for students to voice their opinions about transit at the college through a referendum taking place Nov. 26 to 30.

The vote is for Sheridan students to decide whether a Universal bus pass (U-Pass) is better than the existing shuttle services the college offers.

The Inter-Campus shuttle is a bus service that runs between all three campuses — Monday to Friday from 6:30 a.m. to 11:30 p.m. Students can use the shuttle at any time by showing their Sheridan OneCard when boarding the bus.

After many years of talking about a transit pass, the SSU and Sheridan College are now considering implementing a U-Pass. It would allow all full-time students to use municipal transit for free in Oakville (Oakville Transit), Mississauga (MiWay) and Brampton (Züm).

Although the U-Pass allows free ridership it would come with a cost added as an ancillary fee to tuition.

The U-Pass would cost $197.15 per semester for each full-time student, even those who don’t use transit. With the shuttle, students are still paying a fee, but each student is paying $13.50 per semester.

The SSU organized the online referendum to allow students to decide if they prefer a U-Pass over the shuttle.

Enrique Ponce, president of the SSU, says “this referendum is important purely because it’s the voice of the students that’s going to dictate the future of transit. It’s very important because both options have very critical paths in terms of what the outcome is, so that’s why we’re doing our best to inform students. And that’s why it’s so important that students get involved with the referendum.”

“Voting’s going to happen Nov. 26 to 30 and we’ve made it super easy. Simply go on thessu.ca and they’ll see a link for the referendum, click on that- put in their student credentials and they’ll see the question. Simple as that, vote yes, no or abstain and there it is,” Ponce says.

For students who want to vote in person there will also be voting stations available during that week at each campus. 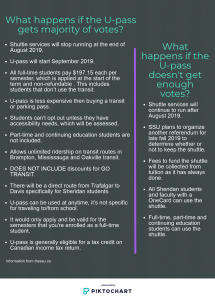 The map shows travel times and route options that are available to students if the U-Pass goes into effect in September 2019.

Cole also added that students aren’t the only ones who benefit from the pass.

“The community also benefits, I mean take a look at the traffic outside of Sheridan College on Trafalgar Road when classes are getting out. When the parking lot’s empty, they empty onto Trafalgar Road so if fewer cars are on the road, then everybody benefits from that as well,” he says.

Students around campus were asked to share their opinions about the idea of a U-Pass.

Sheridan College is not the first to start a U-Pass for their students. Many other colleges already have a U-Pass in place such as Mohawk and Fanshawe College.

At Mohawk all full-time students must pay $68.59 per semester to get an HSR Universal Pass that gives them access to Hamilton Street Railway (HSR) transit route only. Only students on a full semester work placement, which is more than 50 km outside the HSR area, are eligible to opt-out, which would have to be approved by HSR.

At Fanshawe, students have a FANCard, which includes their bus pass that allows access to London Transit Commission bus services seven days a week from Sept. 1 to the end of August. Co-op students aren’t a part of this program, so they would have to opt-in by paying $115/semester.

The Sheridan U-Pass has its pros and cons but in order for a decision to be made about it, students must vote. It’s important that all full-time students voice their opinion by voting.

For more information about the U-Pass Referendum visit thessu.ca