Movember: a fight for men’s health

November is the time of year where mustaches return from their year-long hibernation. The razors and blades that have kept them at bay are cast aside. Cans of shaving cream tossed gone unused. But why?

“It means being open and honest about what is affecting you,” said Enrique Ponce, Sheridan Student Union President. “Movember has grown to be more multifaceted. Focus has moved from prostate and testicular cancer to include mental health now physical health with this move initiative. What I Movember does a good job at is raising awareness of mental health for men and conducting research.”

Ponce has participated in Movember the last seven years. In his efforts to contribute to the cause, Ponce has organized and lead many of the Sheridan Student Union campaigns. His very first Movember campaign at Sheridan brought in almost $5,000.

Movember is a not-for-profit organization that is focused on raising awareness and funding research for prostate and testicular cancer as well as men’s mental health awareness.

“When I started out, I really wanted to push the notion that this is really happening. There is still a lot of people who don’t even know what Movember is about. Or they think it’s some silly initiative where men grow mustaches. But it’s more than that. It’s sort of this norm in society where men are too macho or have too much of an ego to even talk about issues or be sick in any sense. So, I think this month is really an instigation to start conversations.”

Movember has been helping break through the stigma surrounding male health for over 15 years. Starting in Australia back in 2003 and coming to Canada in 2006, Movember set out to change the face of men’s health. They do this by donating to organizations like Prostate Cancer Canada and funding initiatives like the Ironman Registry, TrueNTH Global Registry, and GAP5 Testicular Cancer Translational Research Project, which all seek to conduct more research on testicular and prostate cancer as well and mental health research.

“Prostate cancer and testicular and those things really resonated with me because my father is getting older and I know he has prostate issues which is why personally it resonated with me,” explained Ponce.

Last year in Canada, Movember raised $17.2 million which was up $2 million from the previous year but looking at Movember donations since 2011 the totals have drastically decreased. 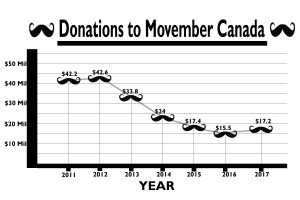 For some people, the impact goes further than just the money.

“I think for me when I started this and having a platform like Sheridan Student Union to really bolster the engagement is having those one on one real conversations. In general, it’s always been a bit of a challenge to have an authentic engagement with students. But I’ve had a few of those concrete conversations come up and for me, that was the best part of it.”

How to grow a memorable mustache?

“When I started, I was under the influence that I probably couldn’t even grow a mustache. And I know a lot of people have those dads who they’ve never seen shave their mustache. And for me I wanted to see if I could do the same thing as my dad,” said Ponce.

There are many difficulties, though, that plague those who take the challenge that is growing a mustache.

“The hardest part is that awkward phase when you’re first growing it and it doesn’t quite look right and that was the first year that I was growing it.”

Enrique Ponce inspired me with his words. Which is why I decided to grow one myself.

Share on TwitterShare on FacebookShare on Linkedin
About Emanuel George 7 Articles
Emanuel is a journalist, photographer and video editor currently at Sheridan College.