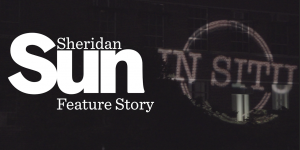 What was once a facility for war in Mississauga has been transformed into a museum of artistic expression for one weekend.

In Situ took place at the Small Arms building on Lakeshore Road, 150 artists exhibiting their creations and performances to more than 1,500 visitors. About 60 volunteers helped coordinate the three-day festival. 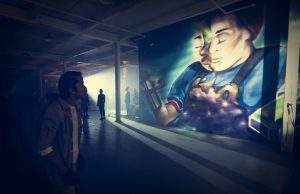 Stripped of its running water, heat and electricity, the facility that once manufactured rifles for the Canadian Army during World War II and numerous other wars before, was set to be torn down in 2008 for potential condo units.

Demolition crews began extracting copper pipe and any other valuable material. Neighbours in the community rallied against the demolition crews to prevent any more damage. Because of the community’s will to keep the Small Arms building up, it was designated protected by the Mississauga Heritage Board the following week to preserve history.

The building has remained empty for the past eight years, until the City of Mississauga purchased the rights of the aging facility with the intention of renovating it.

“The mission of our group is to see the building restored, and renovated as a creative hub for culture, heritage and women’s issues,” says Heather Snell, head event coordinator for In Situ.

Snell strongly believes the facility has the potential to add more cultural diversity to Mississauga, explaining that In Situ was held to animate the building, and demonstrate to the City of Mississauga that arts and heritage do not always need to be dominated by corporate values.

“The inspiration was the building itself and the stories it holds. There are stories of courage, of fear, of taking risks, of doing things differently … we asked artists to respond ‘in situ’ … We wanted to open the space to artists and encourage them to respond to the themes evident in the building. Women’s work, conflict, heritage, abandonment, change.”

Sheridan College had a role in shaping In Situ, as third-year Architecture students studied the Small Arms Inspection building over the summer and consulted with members of the Small Arms Society Board and City of Mississauga building officials to ensure the event could be held inside the facility safely. Humber College was an event sponsor, having art and music students exhibiting their talents, as well as DJs mixing live music.

Moises Frank is just one of a handful of artists at the event with a unique story that brought him to In Situ.

“It seems stupid. You press a cap, and paint comes out. That’s my purpose in life, hahah. That’s what I’m here for.”

Frank, 21, who goes by the name “Luvsumone” as an artist, didn’t go through the “typical” route of getting a high school diploma, getting a degree and ending up with a white collar job.

“My first suspension was when I was in Grade 5, I got suspended for doing graffiti in the school washroom and it went on from there for a few years… I’m not gonna go and say I grew up poor or whatever, I just liked being rebellious when I was younger.”

As the years passed for Frank, he graduated from Oasis Skateboard Factory, honed his skills as an artist and realized his potential outside of spray-painting graffiti.

He began getting gigs to paint murals in Florida, painting a mural for Facebook Canada’s head office in Toronto, as well as exhibiting at this year’s Nuit Blanche to name a few.

“I began realizing my self-worth, my self-value. And I just decided to chase my dream from there. I was born to paint walls. I feel it. Every time I’m painting is the happiest moment for me… if I wasn’t a muralist, I’d be painting every day. I’d be painting the canvases in my room, I think it’s just finding your passion and diving into it.”

For In Situ, Frank created several of the fixtures in the building, one of the main ones a large mural painting of a disfigured woman with artillery shells surrounding the fixture. He’s optimistic about the potential of what the building offers from a cultural standpoint.

The City of Mississauga will begin restoration of the building starting at the end of this year. The Small Arms Society is hoping it can stay involved with the restoration process and that the city not turn the building into a corporate facility.

“We want to show the decision-makers of this building that we want to keep this building as a cultural hub and keep it as a creative space for young and emerging artists,” says Frank.