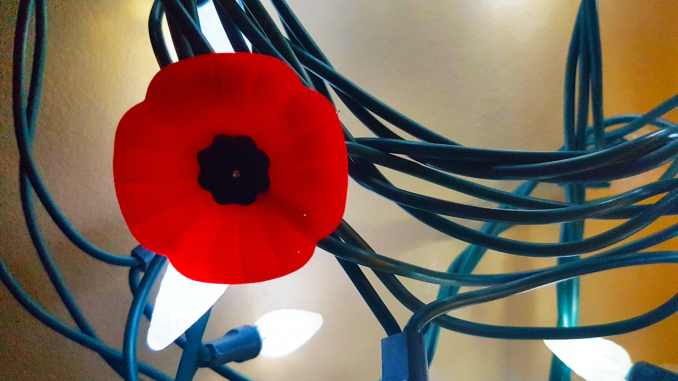 Nov. 1 was a day of controversy on social media. Not only is it the day after Halloween, it’s also the day when major retailers roll out their holiday sea of red and green. But 10 days later is a holiday that often gets over looked. Though Remembrance Day is not recognized by Ontario as a statutory holiday, it is recognized and celebrated nationally.

“It’s a day of remembrance for the men and women who have served and continued to serve our country during times of war, conflict and peace,” says the Canadian Department of Veteran Affairs. Ironically, it seems that many are forgetting this holiday in their rush to countdown to Christmas excitement.

Many all over Twitter and Facebook have been debating whether putting up Christmas decorations this week is overshadowing our nation’s Remembrance Day. The Sheridan Sun took to twitter to poll people’s opinions.

Hey Twitter friends! @TheSheridanSun and I would like to know what your opinion is on putting up Christmas decorations before November 11th

“Who cares?” was the top result among the twitter poll. But the fact of the matter is, there is still a substantial amount of people who do care, and think putting up Christmas decorations is disrespectful to our veterans.

“If it wasn’t for the efforts and sacrifices of our veterans, we would not have the luxury to celebrate any holiday with such freedom. It is our duty as citizens to show respect to our soldiers by wearing poppies and waiting until Nov. 12 to hang decorations,” said Master Corporal Johnathon Kennedy of the 2 Combat Engineering Regiment at the Canadian Forces Base Petawawa. “Remembrance Day is one of the most important memorials the world honours, and it shouldn’t be overshadowed by any holiday.”

From an economic standpoint, retailers benefit by commercializing Christmas so early. The Hudson’s Bay Company had its holiday decorations up as early as late September at its flagship store at Yonge St. and Queen St. in Toronto. “Many customers are excited for the opportunity to begin their holiday planning and shopping early, we are happy to provide them with an exceptional selection of holiday and winter décor and gift item,” said a Hudson’s Bay spokesperson in a press release.

Starbucks Canada also chose to set up its holiday decorations the first week of November. “From my perspective, I really enjoy decorating the store right when November hits. Customers are always really excited to see all the new offerings and beautiful decorations we have,” said long-time Brampton Starbucks employee Andrea Magana. “There are certain things we hold back on until after Remembrance Day, and I completely agree with that. When it comes to Starbucks and sales, the company itself really benefits sales wise from launching its products so early. The Christmas atmosphere is really fun and is a great way to connect with our customers.”

Though the Christmas spirit is enticing to many, Orangeville city council collectively agreed to ban Christmas lights in their downtown area until Nov. 12 to pay their respects to the veterans residing there.