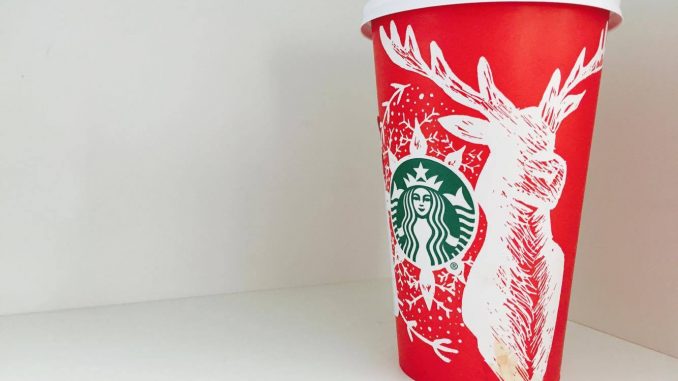 PHOTO AND STORY BY ISABELLA KRZYKALA

With Christmas a little more than a month away stores have made the change from orange and black to red and green. However, one true sign that the festive season is approaching is the reveal of Starbucks holiday cup design.

Since 1997 Starbucks has designed a new takeout cup for Christmas. This year they took it to a whole new level and on Nov 10, Starbucks released 13 new cup designs. The cups were designed by coffee lovers from six different countries.

“So far everyone loves the cups,” said Daniel Camach, barista at Starbucks in Oakville. “It is fun to see how pretty all the cups look when you hand them off to customers.”

Hey Twitter! @TheSheridanSun and I would like to know how you feel about the 13 new holiday cup designs that Starbucks released.

The new designs are being seen as a way for Starbucks to bounce back after last year’s not so popular red cup.

The simple red cup was criticized for taking away the “Christmas spirit” in a video posted by Joshua Feurtstein, an American evangelist and former pastor from Arizona. The video has been viewed over 12 million times, sparking a major controversy on social media.

“The backlash toward the red cups was simply fuelled by media,” said Brooke Fairweather, who was a barista at Starbucks in Toronto during the red cup fiasco. “If the video criticizing the red cups had never aired, I do not think anyone would have batted an eye.”

Customers believe that an important part of the process is letting them help with the creation of the cup. It allows everyone to feel included during the holidays. At the same time customers are recognizing that it must be difficult to try to please everyone.

“I like how the 13 cups are an attempt to please everybody,” said Amy Smith an English student, from Burlington. “I can’t imagine trying to design a single holiday cup that would make everybody happy. Starbucks seems like they are doing their best to make everybody happy and in this internet, crazed society, that is a pretty difficult task.”

“I think the release of the 13 cups was a good marketing decision because Starbucks was able to display what Christmas, and the holiday season, means to customers in 13 different ways,” said Fairweather, who is a Marketing and Advertising student at Sheridan. “If Starbucks were to have released only one of those cups, I do not think it would have been enough, for customers, due to the high expectations following last year.”

While some were surprised by the number of cups released this year most saw it as Starbucks really listening to their customers.

“That’s just a Starbucks thing,” said Camach. “I find that if we do not have something or do not do something that customers want, the next year it usually comes back full force.”