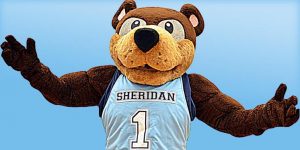 What is a Bruin? It’s not just a varsity player in a double blue jersey.

“In the most broad sense, it’s all of us. It’s our students, our staff, our faculty and our alumni,” says Tahir Khan, recreation and fitness coordinator at Davis campus.

Athletics has always been an important part of my life. I’ve played various sports at many different levels of competitiveness; I have even taken a shot at high school curling. But when I left high school and entered college the stress of maintaining academic standards caught up with me and I left my passion behind.

Somehow through the numerous readings, assignments, and midterms sports got lost in translation. So on a whim in my final year at Sheridan, I decided to go back to the game that captured my heart when I was five years old.

I joined Sheridan’s recreational hockey league. I know it’s not as glamorous as varsity sports, I’m only playing against other Sheridan students; however, your opponent makes no difference.

Despite being out of shape and pounds heavier than my 17-year-old self I would not trade this experience for the world.

My first game surprised me, I had been extremely anxious all day about returning to a game that had consumed my life for nearly 13 years. The seeds of doubt filled my head: what if I’m not good enough? Thankfully I had enough of a support system to step out of my comfort zone I had created my first year of college.

I built up the courage and played my first game. I sat at the back of the bench huffing and puffing through my asthma all game, but I got through it and it was everything I had wanted it to be.

I let go of everything around me that was stressing me out. I stepped on the ice, and I played. Each game as it went by got easier and I remembered why this was so important to me. And now being a Bruin is important to me.

“Our vision for what the post-secondary experience is like for our student-athletes is one where they study, compete, graduate and then succeed”

I believe sports give you a sense of purpose.

“I think it may actually be easier to define the qualities of a Sheridan Bruin. Those are ones of fairness, toughness, equality, sportsmanship and perseverance. Our vision for what the post-secondary experience is like for our student-athletes is one where they study, compete, graduate and then succeed,” says Khan.

Being a Bruin gives you a sense of community. It’s not about the teams you beat or the goals you score, it is about having a sense of belonging.

It takes a game and gives you so much more. There’s nothing concrete about my findings, but I know my personal journey through college became so much more valuable when I found my place as a Bruin.

Being a Bruin allows you to take the built up stress and anxiety often caused by school and gives you an appropriate outlet while keeping fit. Having an outlet for your stress is imperative to keeping a level head and succeeding in college. I’ll look back at my time at Sheridan and be thankful for the opportunities I had to grow and succeed both academically and athletically.