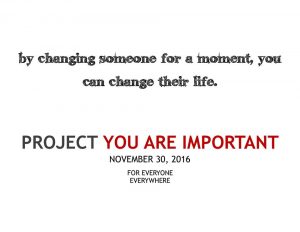 On Nov. 30, people were asked to share uplifting messages with family, friends, coworkers and strangers both on social media and in person.

Leanne McCarthy, who lives in Edmonton, Alberta is the founder of Wee Humans, a charity organization that empowers youth through leadership activities and fitness programming to create powerful results in their own lives, started Project You Are Important in hopes that the message will reach as many people in many different locations in multiple ways letting them know that they’re important and they matter.

“You are important. People are important. We are ALL important. Unfortunately, there are a lot of people who do not get to feel important day-in and day-out. Many people live fearfully for their safety or even their lives. That is not how it should be,” says McCarthy.

People are to share only those messages encouraging others using #youareimportant throughout the day and in turn that they will feel fulfilled too.

“I’m taking what I have and doing what I can to make life work for others, too. More than anything, I want people to feel valued, safe in their self-expression, and empowered to make any changes they want to see in their own lives and in the world. Those are also the goals of Project You Are Important,” says McCarthy.

PYAI comes at a time when the use of social media is under scrutiny for not being used in a positive way.

“This message is direly needed right now. More than ever, people need to unify, start supporting each other, and make love present at ground level,” says McCarthy.

On April.7, 2013. 17-year-old Rehtaeh Parsons from Nova Scotia committed suicide due to sexual humiliation and bullying she faced online.

Parsons’ mother, Leah Parsons also recently spoke at Sheridan College at the For Her We Speak event, which is geared towards giving a voice to victims of bullying and sexual assault.

Everyone can contribute to PYAI however they choose.

“Anyone can significantly participate in less than a minute or take more time and make an even bigger impact. And since everyone is important and has people in their lives who are important who they could share the message with, I feel that everyone should be concerned about PYAI,” says McCarthy founder of Wee Humans

PYAI has shared numerous ways one can make someone feel important today.

People are asked to create videos and share them with the people in their lives, change your Facebook profile picture to the You Are Important picture. You can also send messages to your local politicians, tell strangers in person that they are important.