There aren’t enough women in film.

The number of women entering the Canadian media field in general is pretty dismal.

This is a problem.

The Sheridan Women in Film and Television Club (SWIFT) recently held a panel discussion to address this topic for an audience of about 150. The panelists – Kathleen Cummins, Tracey German, Aisha Jamal, and Maureen Judge – are all women filmmakers and Sheridan faculty.

“I think that when we ask about women in film,” Jamal said, “it’s also really important for us to consider all the key creative roles and if they’re staffed by women and what that changes – because it does change things.”

According to a report released in 2015 by Women in View, only 17 per cent of Canadian film directors in the year 2013-2014 were women. This is a problem because lack of diversity in directors leads to lack of diverse perspective in storytelling.

“I feel that we do bring a particular voice and sensitivity,” said German. “I only take on projects that I feel I can contribute to.”

However, there is work being done to improve gender diversity in the Canadian media landscape.

“Next year there’s a new report coming out again [from Women in View],” Jamal said, “because they haven’t done it for a couple years. They’re working hard on doubling the number of women [in media]. That’s really what they’re trying to do in Canada: get women into TV because that’s where the money is.”

Getting funding for films, especially as a woman, isn’t easy.

“My experience recently in trying to find funding for this narrative project I’m developing is that there’s all these blocks,” German said. “You have to have made two feature films before you can get development money for a narrative. That’s just the old guard. Right? They say they want more women, but then they have these blocks that are impossible.” 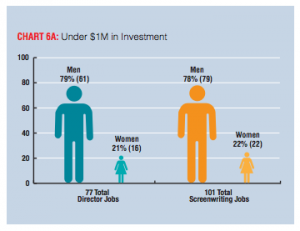 “I think because we went through a recession,” said Jamal, “we do all these things we call ‘risk assessment.’ Risk assessment used to be more about ‘is it safe for your subject?’ etc., but now risk assessment includes directors. So because there is less money, they don’t feel safe giving the money to women. Especially for high [cost] productions. So this is why the number has rolled backwards. It’s one of the explanations.”

Sparking discussions about these issues is one important way to take action that can lead to change.

“This panel was an important event to hold, “said SWIFT president Eve Krogman, “mainly because it was able to shed light on a topic that not many people are too well versed in. I had people coming up to me after the event saying that they had no idea how difficult the film industry in Canada was for women. That’s why we have to have events like this: to spread awareness and to first and foremost create a platform for the voices and stories of women to be heard within the film and media industry.”

Share on TwitterShare on FacebookShare on Linkedin
About Christina Janssens 0 Articles
Christy Janssens is a second-year journalism student at Sheridan College. She writes about books, travel, and culture. She is inspired by new places and authentic stories.