Why is a Bruins team that won a national championship two years ago not in the CCAA (Canadian Collegiate Athletic Association) Top 15 rankings of best teams in Canada for 2017? When Sheridan won the CCAA National Championship in 2015 it was the first time that a team other than Humber had won in two years. Humber has continued to be successful winning the last two titles, but why would the only team to defeat the raining champs be ranked below the Top 15 and what will the Bruins do to climb back? 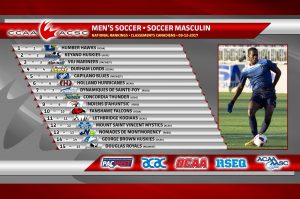 Bruins coach for the last seven years, Andrew Seuradge, explains why his team wasn’t ranked “A team that wins nationals is a team that’s consistent all year round; This year we are not ready to be a top 15 team but next year we will be top two or three.”

To become a top ranked team, Bruins need to qualify for the CCAA National Tournament, meaning they must place first, second or third in the OCAA tournament. They can also move up rankings winning against other higher ranked teams. The team must start by winning regular season games to be invited to either tournament, the Bruins didn’t place in the top three last season and were not invited to OCAA tournament ending their season.

Leading the scoring last year with seven out of the team’s 11 goals, Nicolas Mejia explained the lack of production from his team. “Lots of (player) turnover, (we) had a lot of young guys come in, It was a whole thing of experience basically.”

Mejia believes in his team, claiming that Humber is their biggest rival but sees weakness in them and feels they will be able to take advantage of the situation. “Humber has dropped down a little but from the team they were last year.”

He says that his team has its eyes set on the CCAA National Championship “I think we can make it to the championship as long as our guys play with confidence.”

This is a team that has developed over the past year and is training to be a ranked team and to perform well on and off the field. Seuradge stresses that his players are students first and need to have a certain grade average to stay on the team.

“We recruit players who do well in school and of course on the field.”

But knows it’s a long road to the championship.

“Right now we’re in baby steps and going to have some hard times.”  All of this is in hope that it will teach his players hard work and how to maintain a balanced schedule. Seuradge has been through this all before and is ready for the ride “it’s gonna be rough,

“It’s gonna be tough and its gonna be physical,” and says “we just have to be ready.”