Back in May, Ontario Premier Kathleen Wynne announced that as of 2018, there would be a rise in the province’s minimum hourly wage. Though it could be considered a step to help those with low-income jobs achieve a better quality of life, there are some questions surrounding the move.

According to the Globe and Mail,  25 per cent of Ontario workers earned less than $15 an hour in 2016; meaning more than one million people in the province made less the 2019 projected minimum.

Bianca Rotondo, 26, who currently is working full-time at a Toronto store, has been with the same company for almost four years. She has had promotions and has received annual raises based on her efforts. Rotondo, who is making a few dollars over the current provincial minimum, is hoping her hourly wage will also be bumped up, and previous raises would be honoured.

“It honestly wouldn’t be fair in my position to be making the same wage as a part-timer, when my position is higher with way more responsibility. If they didn’t bump my wage up, it probably wouldn’t be worth it for me to stay, so i’m hoping they do” said Rotondo.

She would also say, “a lot of businesses would probably lose people if they don’t show appreciation for their workers in higher positions, or the workers who have been with them longer than someone who just started.”

Like Rotondo, 27-year-old Cameron Davidson, who works at a small pizza shop in St. Catharines, also hopes companies honour their employees’ past work, even though he has some doubts.

“Work places or businesses should keep things like that in mind when the pay raise happens, but I honestly don’t think a lot of companies will and that’s not right,” said Davidson.
“I feel like situations could vary, but if employees aren’t given what they wanted I could see a bit of a push back happening.”

A pushback that Mississauga restaurant owner Kevin Jazexhi is trying to avoid.

“Even though as an owner, I’m not obligated to bump certain workers’ wages passed the minimum, I will because you need to keep your employees happy. If you don’t do that then people will quit or cause other problems. You have the potential of losing good workers, who could end up at competing companies,” said Jazexhi.

“At the same time, even though you do want to keep your employees happy, for smaller companies it could be tougher to offer those wages, compared to a larger corporation. So some staff might have to be cut, so that other staff could get payed what they want. It has to balance out. Some companies might not even go higher than the minimum.”

Like Jazexhi, Rotondo is also aware that for businesses to meet the new provincial plan, some sacrifices have to be made.

“I feel like our store will have no choice but to cut some hours, because they’ll have to accommodate the increase in money they are now having to pay people. That’s probably going to be a common thing throughout all retail,” said Rotondo.

Though Jazexhi wants fair wages for all workers, he believes that the pay jump was put into place too soon, and that a lot of business owners will have to make a lot of quick decisions.

“Usually when a wage rise like this is going to happen, it has been publicly planned out for years by a city or province, and not announced six months away like this. I can’t speak for everyone but I’m sure not every business is planned out and ready for it.” 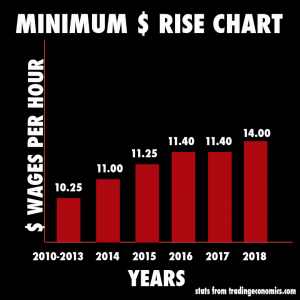