Mall visits among young people in Canada have fallen by 30 per cent as of 2013, according to research by Piper Jaffray. By April this year there were more retail bankruptcies than in all of 2016.

One person who said they have been greatly effected by the decline of retail is Tony Estrela, owner of Star Shoes in Etobicoke. “My number one concern is the online shopping,” he said, “I noticed the last couple years our business has dropped maybe 15 to 20 per cent because of the online shopping.”

Online retail however, grew by 41 per cent last year according to Statscan. This is compared to 7.8 per cent for the industry as a whole. The 7.8 per cent figure includes, however, e-commerce and dining which have both been growing at an impressive rate.

Online shopping has a convenience and appeal that may continue to worsen the retail situation. Mississauga resident Jacqueline Jolani said that she shops online because she doesn’t have time to go to a mall and shop around. Also, she can try on clothes in the comfort of her own home and can just send them back if she doesn’t like them.

Many people who shop online choose to because of greater selection and the convenience of home delivery.

“Everything is cheaper than in stores, and most of the time it’s free shipping,” said Angela Accentura, an Ottawa resident, “and the best part is that it comes right to my door.”

Younger people like Jolani and Accentura were not the only ones who shop online, Elizabeth Schembri, a 53 year-old Mississauga resident also said she likes to shop online because, “I like the convenience 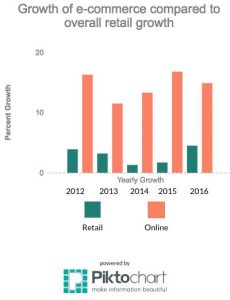 of shopping online. Sometimes I’m too busy to go to a store.” She also said that she can find more products online.

Many big retail chains in Canada such as Hudson’s Bay, Lululemon, and Reitmans have been posting losses and declining store traffic for three quarters in a row – many think this due to the rising popularity of Amazon.