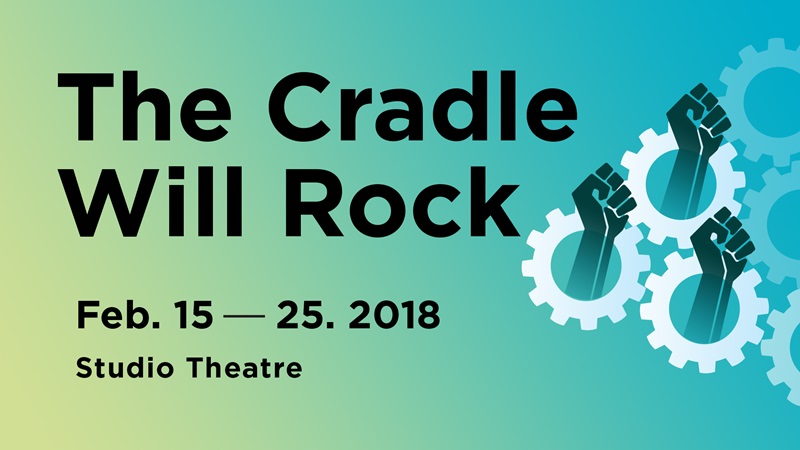 Over the last few years, Theatre Sheridan’s best productions are often the ones that come to the Studio Theatre mid-winter. And more often than not, they seem to be titles and musicals most people haven’t heard of before.

And so it is with Sheridan’s new production of Marc Blitzstein’s The Cradle Will Rock. The show continues the tradition of great plays you didn’t know you needed to see. Cradle is the unmissable theatrical event of the season.

Each moment in the 95-minute musical is lightning quick with a seamless fluidity between songs and the story. There’s a pulse-pounding energy inside the theatre that keeps hold of the audience from beginning to end. (Curiously, this fluid approach in one act echoes several great modern musical dramas, such as Fun Home and Life After.)

At first glance, the musical looks and sounds like a traditional Broadway show. The music is reminiscent of several composers of the mid-20th century, and Barbara Rowe’s colourful costumes are as pleasant as Denise Lisson’s modest, rugged sets.

But the most exciting element of director Marc Richard’s (of last year’s masterful Floyd Collins) production is the immersive design and nature of the performance. Before the play even begins, there’s an interactive performance with the actors replicating a real event about the play’s quirky history.

The show was first staged 80 years ago with a tale of life imitating art. Set in 1937 (the year the show premiered) it tells the story of Larry Foreman leading a workers’ strike in the fictional Steeltown, U.S.A.

But a few days before opening night, the production was shut down by Franklin D. Roosevelt’s WPA project in fear of inspiring revolt. So the show moved 21 blocks north to a new venue, and the show courageously went on.

You’ll follow in the footsteps of the play’s history

As the audience arrives, the audience goes on a literal walk from Sheridan’s entrance to the theatre in the campus. Before you even arrive the show celebrates Blitzstein’s epic style with a mix of subtle Brechtian style and site-specific theatrical techniques.

The staging’s nuances may go over some audiences’ heads, but never mind. You don’t need to know the theory and history to appreciate the brilliant design.

Upon arrival, your new friend Mickey (one of the actors) explains it’s June 16, 1937. You’re about to follow him on that fateful hike from 39th Street to the Venice Theatre on 58th for the first performance of The Cradle Will Rock. You’ll meet others along the way who share the play’s history with you before fully immersing you in the story.

Once seated in the theatre, the main event begins with a stunning performance in Steeltown. The plot mainly revolves around the city’s residents and their struggle for equality against the greedy Mr. Mister, who owns just about everything in town.

The story soon becomes about much more than Steeltown’s elite scoffing at the demands of the newly formed unions. The politics are only as heavy as the depth of attention you pay them, and never so thick it becomes difficult to follow the action.

Colin Kelly’s Larry Foreman commands the stage in his few speeches, but Sydney Williams’ Moll is a hero in her own right. When Kelly and Williams sing, you understand their intentions and know they mean far more than just the words they say.

As you can see, the character names in Steeltown aren’t known for their subtlety. One of the few restrained moments is with Harry Druggist (Russell Niessen) flashback in, you guessed it, a drugstore. The tear-jerking Scene Five is the best in the show, leaving a haunting memory when it’s over.

The real-life setting is a dazzling, immersive experience

The cast shines with a one-two punch of Blitzstein’s sharp book and a bright, backstage production design. The brown and yellow lights and inviting brick walls provide a smart, misleading atmosphere that relaxes the audiences. Even the sets match the music’s equally warm and ominous tones.

All in all, The Cradle melds history, design, and a great story to make a fully engrossing and captivating night at the theatre. The historical element is thick, yes, but it’s not necessary to enjoy the work.

Toward the end, there’s even a quick jab at the mirror divide here at the college between the students and administration. The wicked Mr. Mister describes the expense of school, especially when led by his hired cronies. “Two, three, four years of training will do them good.” Like the play itself, he knows how powerful his influence is.

For audiences looking to make the most of the production, be sure to arrive at least 30 minutes before the scheduled start time. This will let you see the full prologue scene in full and give you first access to the seating in the theatre. The last interactive pre-show parade leaves from the Theatre Sheridan box office ten minutes before the curtain each night.

If you’re looking for the most creative and exciting musical production now playing, or you’re simply interested in immersive theatre, The Cradle Will Rock is the best you’ll find for miles around.