Toronto FC began their 2018 season this week with hopes of doing what no team has done since 2012: repeat as Major League Soccer champions.

The team won their first MLS Cup in franchise history last December with a 2-0 victory over the Seattle Sounders. As defending champions, the players know that other teams will bring their best against them.

“We know that it is very hard to repeat,” goalkeeper Alex Bono told reporters at a press conference. “And everyone that plays against us, we’re going to have a target on our back anywhere we go. For us it’s important that we play with the intensity, with the ability, with the mindfulness that we need to play at to make sure that we can avoid everyone’s best game.”

To solidify their roster Toronto made several additions. In February they signed Dutch national Gregory van der Wiel. The 30-year-old defenceman most recently played for Italian club Cagliari and has 46 career appearances for the Netherlands, including the 2010 World Cup Final.

They also added 24-year-old Spanish player Ager Aketxe, who scored five goals for Cadiz last season. TFC also focused on keeping the players that have contributed to their success. On Feb. 28 they re-signed veteran defender Justin Morrow to a multiyear extension. The 2017 MLS All-Star has been with TFC since 2014, making 145 appearances for the club. Morrow believes that the team will thrive with the added pressure on them this season.

Sheridan College lost their presence on the TFC roster this off-season, however. Former Bruin Raheem Edwards, who led Sheridan to a national championship in 2014, was claimed by Los Angeles FC in the expansion draft before being traded to the Montreal Impact.

The veterans on TFC believe that the roster moves this off-season show a commitment by team management to build a consistent winner.

“It’s impressive that the front office can somehow find a way to bring all these players in,” Bono said. “I think that’s awesome. It speaks volumes to the ambitions of the club and how well our front office has worked and created this great roster that we have. The depth is coming in, the talent is coming in. I’m definitely excited for the upcoming season.” 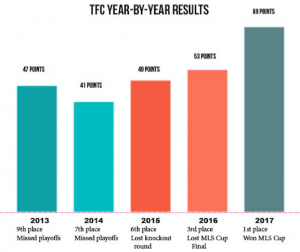 TFC did not get off to the start they wanted, however. On Saturday they dropped their opener 2-0 to Columbus, surrendering goals just before and after halftime. Their performance did improve in the second half, however, but they were unable to find the net against a Columbus team that challenged them in last year’s semi-final.

“In the second half we made an adjustment to try to press the game a little bit higher,” head coach Greg Vanney said to reporters following the game. “We went way more aggressive on the defensive end and took a little more risk at the back. The net result of that was…we were in and around their box a lot more. Probably two or three clear-cut chances. We need to punish them for those opportunities. They punished us for our mistakes, we didn’t punish them for theirs.”

In 2016 TFC suffered a heartbreaking loss to Seattle on penalties in the MLS Cup Final. They rebounded in 2017 with the greatest season in MLS history, setting a league record for points and winning the championship. They showed they react well to adversity and are prepared to meet any challenge as they try to become the first team since the L.A. Galaxy to win back-to-back championships.