Sleep is often an alien concept for students. Constant procrastination, getting back into routines and balancing life can strain sleep habits. But is your learning being affected by the lack of sleep you get each night?

Over the course of the year, students often don’t get as many hours of sleep as they should. Respirologist and Medical Director at Milton MedSleep, Dr. Ganesh Subramanian says that the young adult stage is significant for development.“For the 18- to 25-year age group, that’s a period of transition. Where the typical amount that most teenagers and young adults need are between seven to nine hours of sleep,” says Subramanian.

“Sleep also plays a role in inflammation. People who tend not to sleep very well often feel achy all over and that affects your quality of life. When you have lower energy, you tend to eat more because the lack of sleep stimulates a pathway to the brain called ‘leptin’. Leptin is a source of increased appetite. You tend to eat more to supplement for lack of energy and perceived lack of energy,” Subramanian adds.

Sleep affects students in many different ways; their memory, concentration and focus. Subramanian says that lacking the amount of needed sleep leads to an increase in body aches and appetite and that then leads to weight gain.

Sheridan Marketing student Bianca Altomare adds that she feels out of rhythm and not like herself if she doesn’t get a good night’s rest. Anxiousness, short temper and a sluggish feeling are all characteristics of a lack of sleep.

“But, when I get a sufficient amount of sleep I notice my thought process flows a lot smoother. I’m a lot more calm throughout the day and have less anxiety,” Altomare says.

Students tend to retain minimal information when they deprive themselves of sleep by pulling an all nighter and cramming facts in last minute. “People who don’t sleep a lot, they often show a reduced attention span, lack of concentration, poor vigilance scores, short term memory. It’s a vicious cycle,” Subramanian says.

Brock Psychology graduate Jillian Ivany says that sleep is essential for memory consolidation. “While you are asleep your mind works to ingrain the lessons, memories and facts you have learned throughout the day into long term memory,” Ivany explains. It’s important that you allow yourself and make time for short naps to rest your mind and rejuvenate.

“It has been proven that taking a nap approximately 20 minutes after studying helps students remember what they had learned in the day and while studying,” Ivany adds.

With technology being such a huge part of everyday life, separating from the social world is often a hard task. But, the increased exposure to LED light that most screens emit affect your sleep by straining your sleep habits. “Students who are looking at their phone or working on their computer are exposed to the blue light and therefore it takes them longer and longer to fall asleep,” adds Subramanian.

In the daytime your mind and body are awake because of the light exposure to your photoreceptors and vice versa for at night.

“When it’s dark outside, it affects the photoreceptors of the eyes, increasing melatonin levels. Melatonin is the hormone that is produced in the brain to the photoreceptors in the eye that ultimately induces sleep. It’s a sleep promoting hormone. When you have exposure to light, especially blue light, it suppresses melatonin,” says Subramanian.

It’s important that you allow yourself sufficient downtime before bed to reduce stress and relax your mind. 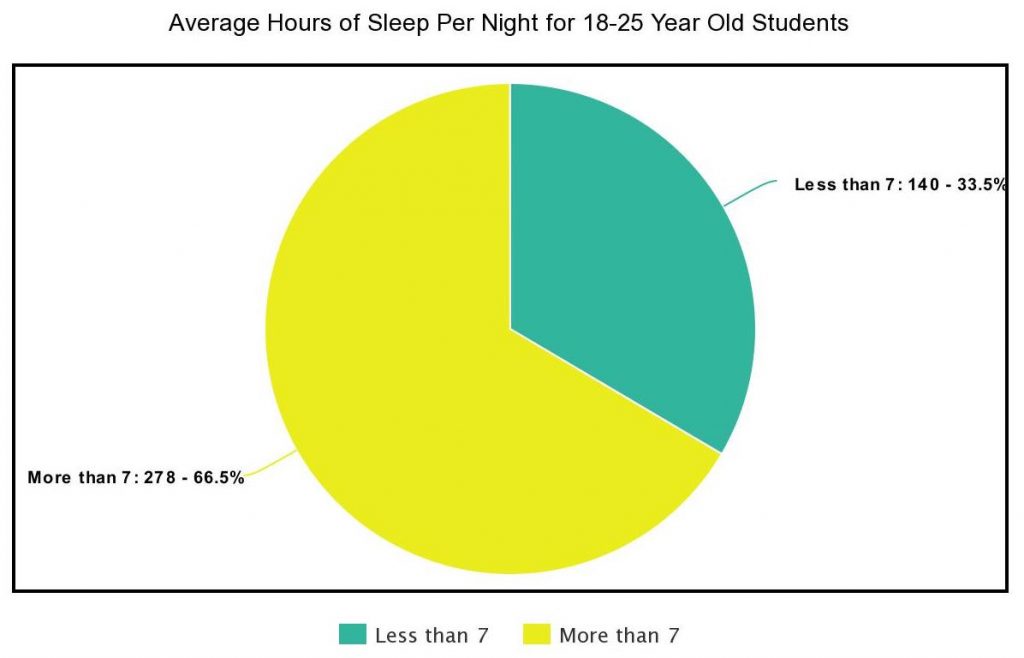 “Two hours before bedtime, do things to downregulate the brain. It’s recommended to avoid vigorous exercise, avoid heavy dinners and the consumption of alcohol or smoking,” says Subramanian.

Practicing good sleep hygiene by sticking to a sleep schedule is a great way to improve the body and mind. “It’s important that you maintain a night routine to condition your brain to relate these acts with tiredness,” says Ivany.

As well, differentiating spaces for school, sleep and relaxation are another tool for training your mind.

“It’s important to only be in bed for sleep. If someone is restless and can’t sleep, they should get out of bed and leave the room, if possible. That way, the bed and the room are associated with being tired and resting,” suggests Ivany.

Share on TwitterShare on FacebookShare on Linkedin
About Emily Skilling 0 Articles
Emily Skilling is a journalism student at Sheridan College. She enjoys music, salad, and bingeing on Netflix.

With her quirky personality and her astute wisdom, it’s no surprise Gia Goodrich has earned her way to the top by overcoming countless adversities. Gia […]

Whether in Vancouver, B.C. or St. John’s, Newfoundland, the art of drag is taking over coast to coast. Drag performers are introducing a community that […]

Travel is coming back, but the added expenses are making people hesitant.    Regardless of their vaccination status, all travelers returning to Canada must have a negative PCR test 72 […]