Netflix has kicked off the new year with an all-new take on Lemony Snicket’s A Series of Unfortunate Events.

This is not the first time that these characters have been seen on the big screen. In 2004, a film of the same name starring Jim Carrey was released, compressing the first three novels into 90 minutes where some facts and details seemed to fade away. This series explores and allows for the details that are usually cut from big time movies. Netflix takes their time and gives each book its own “movie” by using two episodes. Narration and interaction between the characters follows Snicket’s words to a tee. If only they were able to create better graphics and not rely so heavily on green screens.

Snicket’s narration is off-putting. It’s awkward and weird, not to mention confusing for those who have not read the books. The audience doesn’t know who he is or what his purpose is.  It makes you wish they kept Jude Law and his silhouette at a typewriter as he narrates. It tells people that he is writing their story. It just made sense. Patrick Warburton’s Lemony Snicket did not. They shouldn’t have Warburton walking in the scenes to narrate as if he too were there with the children. It makes it look like he is in real time and experiencing the events for himself, despite the fact that he is actually narrating about the past. It wasn’t the words itself that made it bad, it was the execution.

Just like in the film, the series starts off with the three children playing at the beach when Mr. Poe approaches them with some dreadful news. However, this is where the similarities end. Who tells anyone about the death of a loved one with a smile? Apparently Mr. Poe does. There is no way that viewers will miss this one. This is one of the few times where the acting fell short.

The role of Aunt Josephine was another example of acting that fell flat. Meryl Streep as Aunt Josephine took on the persona of this crazy, paranoid woman with vigor. Alfre Woodard’s Josephine, looks like an average woman who some might call quirky. She is definitely not a vision of crazy.

Neil Patrick Harris’s take on Count Olaf is stunning. He takes the role of Olaf and shows people the clever, cunning yet subtle nature of the Count from the books. Just like a book, character development is slow. Details need to be told to get a sense of who that person is and the Count is no exception. He’s less exaggerated and creepy compared to Carrey’s Count Olaf. Carrey’s Olaf is a lot like many of his other characters. They’ve got a personality that is unique to him as an actor rather than following the words written by Snicket. 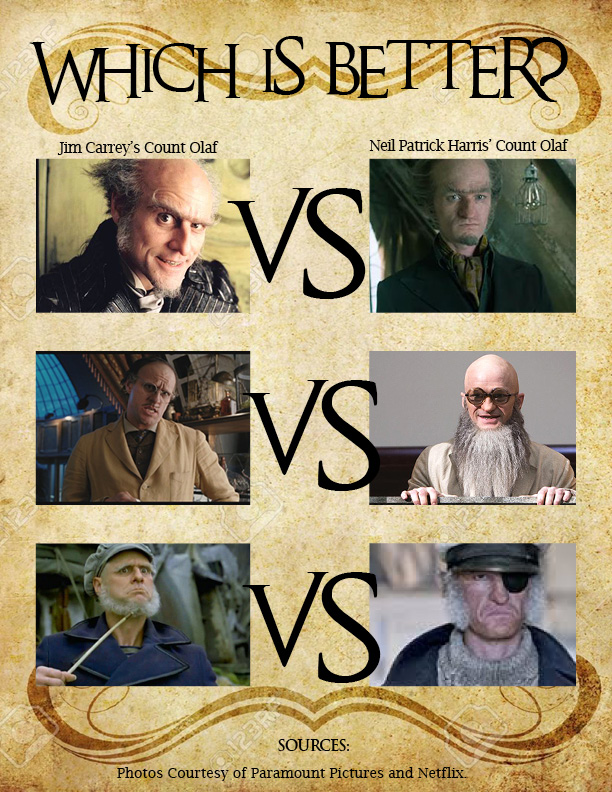 Malina Weissman’s Violet is a strong, protective and most importantly believable portrayal as the eldest Baudelaire. She’s shy and polite at first but has an underlying fire to protect her brother, Klaus and her sister, Sunny from harm. It’s nice to see that the series included the children solving Uncle Monty’s death. This is not shown in the film and that was a shame because it helps show the audience just how smart the three children are.

Where is this illusive spyglass? The spyglass has been a common prop used in both the film and the series, however, they have yet to appear in the books. There was no mention of any spyglass in the first two books and yet both film and series include it right off the bat. This happens again with the introduction to the mysterious spy, Jacquelyn played by Sara Canning. She has also not appeared in the first two books and yet the series seems to show that she has. Lastly and probably the most shocking discovery was the idea that their parents were actually still alive.

Even though there is some bad, the good outweighed it in the end. The more you watch, the more you want it. You get invested. Just when you think you have it figured out, you get thrown a new twist. It leaves viewers wanting to read the books, just to know what happens next!

Unlike the film, which stops at book 3, this series is already planning its next season and this time it will be ten episodes. It follows the tragic lives of the three Baudelaire children through the next five novels starting with The Austere Academy and ending at The Carnivorous Carnival. The third and final season expects to cover books 10-13.