Winter is coming. As it gets later into the year the weather gets colder, the days get shorter and the holidays are right around the corner. But with the winter season here, it’s a great time to sit down and talk about our mental health.

O.canada.com says that around 3 per cent of the Canadian population suffer from seasonal affective disorder (SAD), and while that may not seem like a big number, that’s about 1.1 million Canadians that suffer from it.

Seasonal affective disorder is a type of depression that occurs in the same season each year. While most who suffer from SAD say that it occurs in the fall or winter, for some it is present in the summer. Researchers say SAD is mostly attributed to the change is exposure to sunlight, with the changes in light throwing off both a person’s biological clock and sleep-wake patterns, while also affecting dopamine and serotonin levels. With the days getting shorter, the fall and winter months are the most common seasons to experience SAD.

I spoke to a Sheridan student who is currently experiencing SAD. For this article they asked to remain anonymous, but they gave me some great insight. “It’s almost like every year I can feel when it’s coming. Like the exact day it starts I get this ‘Oh boy it’s happening again’ feeling” she explained. “Generally the first few weeks I stay inside as much as possible. I hate staying inside as much as I do, but it feels even worse being out in the world and just feeling so distant from everyone.”

People who suffer from SAD may not even know that they are suffering. There’s a stigma around it from those who do not suffer that it is not ‘real’ depression or that ‘everyone feels a little down in the winter’. But for those who deal with SAD every year, the changes are quite drastic. 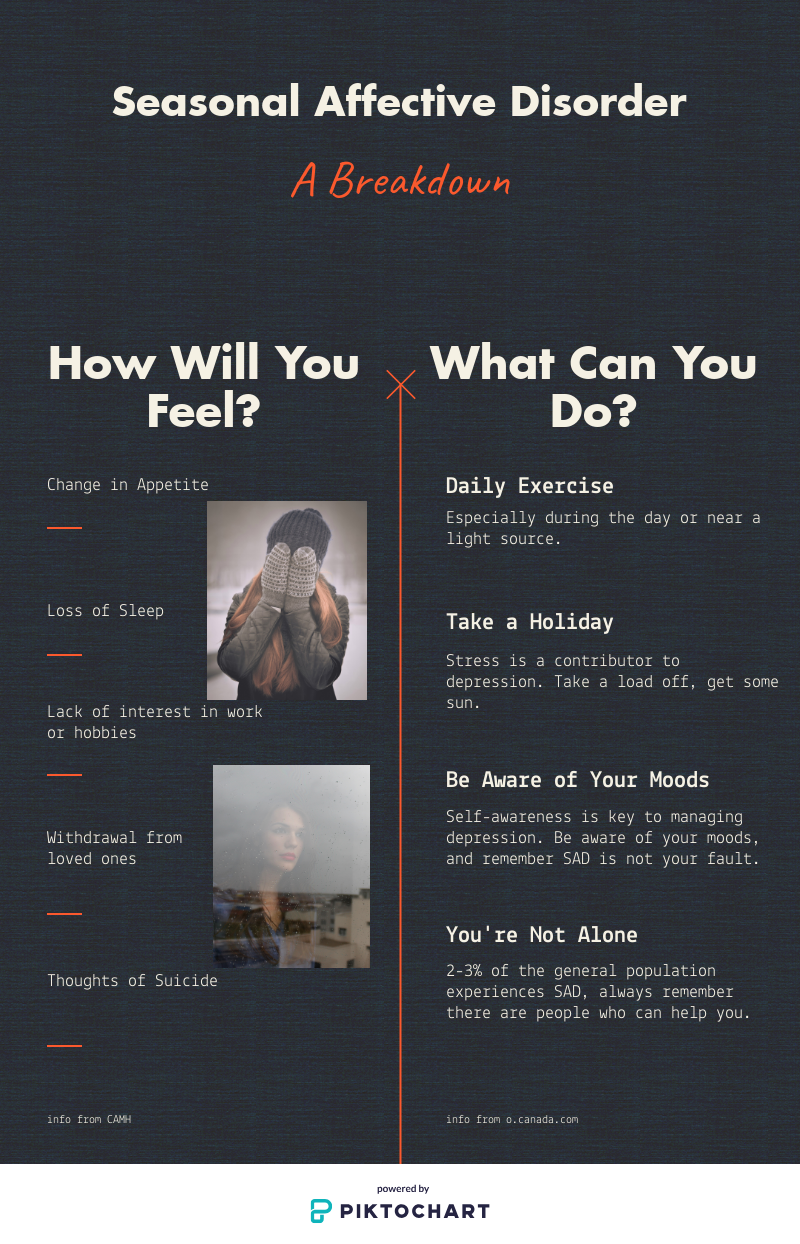 According to the Centre for Addiction and Mental Health (CAMH), along with a sad, almost despairing mood that can last up to weeks at a time, people who are going through SAD may feel: changes in appetite and weight, sleep problems, loss of interest in work, hobbies, people or sex, a sense of withdrawal from loved ones, agitation or feeling slowed down, irritability and trouble concentrating. Some more extreme symptoms would include thoughts of suicide, a loss of touch with reality or hearing voices (hallucinations).

In terms of treatment, CAMH mentions that the most common way to help those suffering from SAD is with light therapy. They are exposed to bright artificial light, which in the winter months when days are shorter and natural sunlight is harder to come by can help those whose sleep-wake patterns have been thrown off. Although light therapy is effective for most people, there are some mild side effects which can include: nausea, headaches and eye strain brought on by an over exposure to light. There are some other therapies including prescription medications and magnetic seizure therapy (MST), but they are only used in more severe cases of SAD.

Those who are suffering from SAD need to know that they’re not alone; and as empty as that sentiment sounds, it’s true. There are a lot of different resources that can be used such as Kids Help Line at 1 800 668-6868, ConnexOntario at 1-866-531-2600, or even talking to a family doctor. The most important thing to know is that there are people who can help you, and they will always be there for you.

Share on TwitterShare on FacebookShare on Linkedin
About Owen Scarrow 0 Articles
Owen Scarrow is a second-year Journalism student. He loves to write opinion pieces and sports stories, but one day hopes to be an on-camera talent.